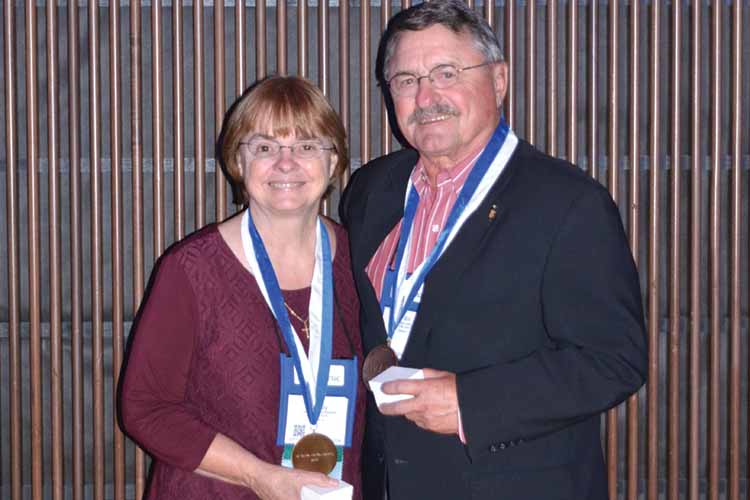 William Gengler, the founding section head of Dentistry and Oral Surgery at the SVM, was awarded the American Veterinary Dental College (AVDC) Presidential Medal of Stewardship, presented to individuals who have exhibited an exceptional sense of duty. The award recognizes individuals dedicated to caring, expanding and improving upon the precious resources entrusted to them. As past president of the AVDC, Gengler was instrumental in integrating dental education into DVM curriculum through his involvement with the Student American Veterinary Medical Association (SAVMA). Since his retirement from UW, he has continued to show leadership and dedication – fostering involvement with future DVM’s and AVDC Diplomates. The Presidential Medal of Stewardship honors William Gengler’s legacy and pioneering spirit.

Christopher Snyder, clinical associate professor of dentistry and oral surgery, received the AVDC Peter Emily Service Award. Presented to an outstanding Diplomate of the College, the award recognizes leaders who further the field of veterinary dentistry with their contributions in areas of academic and research efforts, scientific presentations, publications, and community involvement in promoting a greater understanding of veterinary dentistry.

Snyder and Cindy Bell, co-founder and former director of the Center for Comparative Oral and Maxillofacial Pathology (CCOMP), along with two others, were awarded the $10,000 Academy of Veterinary Dentistry Grant to support their research grant titled, “Analysis and assessment of pulp vitality in intrinsically stained teeth in dogs.”

Stephanie Goldschmidt, who recently completed her dentistry and oral surgery residency at the UW School of Veterinary Medicine and is now an assistant professor at the University of Minnesota, earned several honors at the recognition event, winning two awards and a scholarship. She received the Robert B. Wiggs Outstanding Candidate Award, which is presented annually to an extraordinary veterinarian on the successful completion of an approved training program. Selection for the award is based on letters of support from mentors and residency directors and criteria such as presentations, publications, research, and overall contributions to veterinary dentistry.  Goldschmidt also earned the Mark and Debra Smith Award, which honors the author of the most outstanding and influential manuscript published in the Journal of Veterinary Dentistry in the past year, for her manuscript co-authored with Jason Soukup, “The influence of axial grooves on dislodgement resistance of prosthetic metal crowns in canine teeth of dogs.”  Her third honor of the evening was the Pat Frost Memorial Scholarship, awarded to outstanding candidates who have taken the AVDC certification exam.