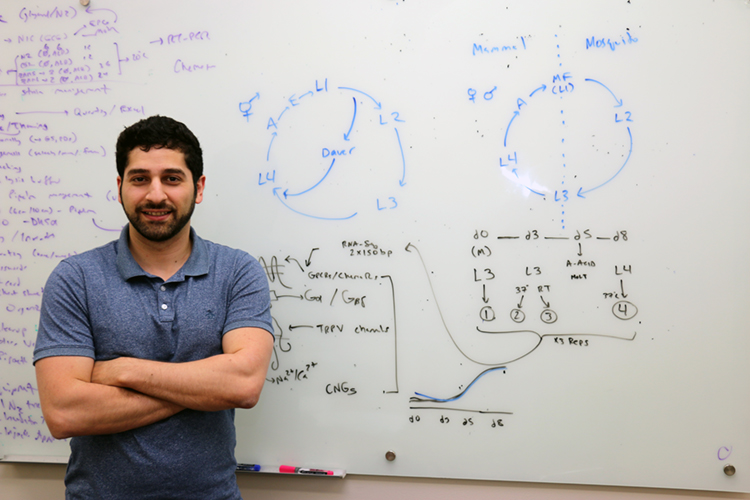 More than 1.5 billion people around the world — about one in five — have a parasitic worm living inside them. In domestic animals and wildlife, the distribution is even more widespread.

Sit with those uncomfortable statistics for a minute and you’ll understand the impact of the research conducted by Mostafa Zamanian, an assistant professor of pathobiological sciences and trainer in the Comparative Biomedical Sciences graduate program at the UW School of Veterinary Medicine (SVM). Zamanian joined the SVM in 2017 to study parasites that challenge human and animal health.

“Most people don’t know how big a part of our ecosystem they are and how important they’ve been historically to the development of our immune systems,” he says. “Before there were treatments, almost every human on earth was filled with a few different parasites.”

Zamanian himself wasn’t aware of the devastation wrought by parasites until his final rotation in graduate school landed him in a parasitology lab.

“When I joined that lab, I had never been exposed to even the names of the diseases that were being studied or the impact of these parasites around the world,” he recalls. “It was shocking to me that I could go through much of my life having never heard of diseases that had this much impact.”

He was pulled in by parasites’ complex biology, “still rich for discovery,” and by genome sequencing projects then getting underway “that would allow us to tackle questions that previously were not approachable,” he says. “The constellation of those things excited me and pushed me to go down this path. I haven’t looked back since.”

Below, Zamanian describes his research program and what’s at stake for global health.

On Call: What do you study in your lab?

Zamanian: We’re broadly interested in neglected tropical diseases. These diseases are labeled neglected because relative to the global burden they cause, they’re considered understudied. There has been a concerted effort to raise their profile and push for new means of therapy and disease control.

In human medicine they’re diseases of poverty and are distributed mostly throughout the developing world.These diseases bring about a great deal of morbidity, but also sometimes mortality. They are associated with poor development in children and a wide range of other clinical manifestations that cause physical disability and disfigurement.

My laboratory focuses on two vector-borne parasitic worms in particular: mosquito-transmitted worms that cause elephantiasis and snail-transmitted schistosomes, which are human blood flukes. Elephantiasis infects 120 million people; about a third are significantly disfigured and suffer from swelling of the limbs.

How do these parasites connect to veterinary medicine?

Almost all parasites studied in human medicine have closely related counterparts in animal medicine. We use many of the same drugs to treat humans and animals, and in fact the antiparasitic drugs used in human medicine mostly came from research done in a veterinary environment.

The filarial parasites that we study [e.g. Brugia malayi] are closely related to heartworm [Dirofilaria immitis]. We study the filarial worms alongside heartworm and they give us a model to compare and contrast.

What do you aim to achieve through your research?

We have two broad goals. One is to identify new drug targets in these parasites and validate these targets for eventual screening. The second is to uncover the basis of resistance to anti-parasitic drugs and what mechanisms might be involved.

For most of these parasites we have drugs that work, but resistance to the drugs threatens future control. This is already a huge problem; anti-parasitic drug resistance is very widespread in veterinary medicine and it’s an emerging threat in human medicine.

How do you conduct this work?

In the case of finding new drug targets, we use molecular and computational tools to identify specific proteins that if targeted by a drug would prevent parasite survival and/
or transmission. In the process we learn more about the rich fundamental biology and fascinating life cycles of these parasites. In between infecting mammals, they have to go through an intermediate host.

In the case of filarial parasites, those get passage through a mosquito. How they interact with the mosquito, how they are passed from the mosquito to a human, and how they develop and eventually cause disease are all points of potential intervention for us.

Can you describe the research tools you use?

We’re involved in international projects to decipher the genomes of an unprecedented number of human and animal parasites, dig into those genomes computationally, and prioritize what are likely to be good drug targets. But these approaches can only take you so far; you want to then do experiments in the laboratory. We have a wet lab where we can culture parasites, study their behaviors, and clone genes that we’re interested in as potential drug targets, to investigate whether these targets could lead to a new method of therapy or interruption of the transmission of disease.

Receptors fundamental to parasite biology are one of our biggest focuses. Some of these receptors are involved in how parasites perceive and navigate their environment, others control neuromuscular movement or reproduction. These are areas we can exploit to try to develop new therapies. We’re also interested in finding how existing drugs operate at that same interface between parasite and host.

What are some important findings from your work?

One thing we’ve been focusing on is that the mechanism of action of the drugs most commonly used to treat parasitic infections, which are administered to millions of people around the world, are not clearly understood and might differ substantially from parasite to parasite.

In collaboration with others we have recently shown that ivermectin (which was discovered by an alum of UW–Madison and the veterinary science program [William Campbell MS’54], who won a Nobel Prize) is likely to act through a mechanism that interferes with how filarial parasites interact with the host immune system. We’ve identified new players — small vesicles, or membrane-bound cargo — that parasites release when in the host and we have shown that ivermectin abolishes the release of these vesicles.

This realization has opened up new avenues and caused us and other laboratories to start thinking about how we can better measure outputs of drug response. There is a big disconnect between drug screening done outside of the host and what translates to success in the host environment.

What has your time on campus been like so far?

I was excited to be able to start my lab in this environment, where there are so many infectious disease investigators with an incredible amount of expertise to share. This was an ideal destination for me. Infectious disease is clearly a big strength at the school and the university. And both within the vet school and across campus, it’s a very collaborative environment.

Looking ahead, what do you hope to accomplish?

I would be happy if in say five to ten years we had made significant progress in better understanding the interaction between parasites and their hosts for developing new therapies, but also have a better fundamental understanding of parasite biology. I hope that in the process we deliver new insights and tools to the larger parasitology community, because what our lab does can help seed what other people do as well. We would like to get to a place where a lot of this early work will lead to very tangible outcomes.