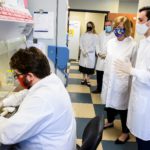 This week Sen. Tammy Baldwin visited a lab in Madison’s University Research Park where University of Wisconsin–Madison infectious disease experts have been cataloguing subtle genetic differences between hundreds of strains of the virus that causes … 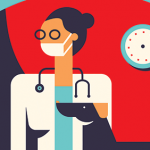 This expert response comes from Laurie Larson, veterinarian and director of the Companion Animal Vaccine and Immuno-Diagnostic Service (CAVIDS) Lab at the UW School of Veterinary Medicine. Question: My breeder insists on titering. Our state, …

Note: UW-Madison will be publishing answers to questions about COVID-19 and the pandemic each week in a COVID questions column. If you have a question, please email it to covid19update@uc.wisc.edu. This post was originally published here. Q: …

“All apes and many monkeys are almost certainly susceptible to COVID-19 infection and disease,” says Tony Goldberg, an epidemiologist at the University of Wisconsin, Madison. If wild gorillas become infected with COVID-19, the virus would almost certainly be more severe than in the captive animals at the San Diego Zoo, which had “excellent veterinary care,” Goldberg adds. “It would probably spread very rapidly within gorilla families, which spend all their time together.” 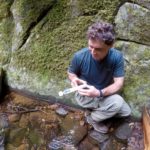 In 2005, chimpanzees at the Tacugama Chimpanzee Sanctuary in Freetown, Sierra Leone, started getting sick. They would stumble, vomit and stop eating. The illness came on quickly; some chimps were found dead before caretakers even knew they …

Thousands of daily cases. Hundreds of thousands of deaths. Hundreds of millions of vaccine doses. As the tallies of COVID-19’s effects in the United States have mounted to a dizzying scale, a team of University …

A new and always fatal disease that has been killing chimpanzees at a sanctuary in Sierra Leone for years has been reported for the first time by an international team of scientists led by researchers at the University of Wisconsin-Madison. The disease, reported Wednesday in the journal Nature Communications, is caused by a newly discovered species of bacterium and comes as the world wrestles with a devastating pandemic caused by another novel foe, the new coronavirus.

Tacugama’s veterinarians pursued several red herrings, including a virus that causes neurological problems, for which they vaccinated every chimp at the sanctuary. They also undertook an exhaustive removal of a poisonous plant found in the chimps’ enclosure. But cases kept coming. In 2016, the Pan African Sanctuary Alliance, an umbrella organization for the continent’s primate sanctuaries, reached out to epidemiologist Tony Goldberg, Owens’ advisor at the University of Wisconsin–Madison. Goldberg was immediately intrigued. “This is an unknown infectious disease that poses a serious risk to the health and survival of an endangered species, which happens to be our nearest relative,” he says.

Chimpanzees had been dying mysteriously at the Tacugama sanctuary in Sierra Leone for a decade or so by 2016 when Tony Goldberg set to work on figuring out why.

The sanctuary staff, veterinarians and biologists had conducted several investigations into the disease over the years. It was not contagious, did not infect humans, did not appear at other sanctuaries, but killed chimps at Tacugama in an unmistakable, alarming pattern.

This fall, researchers in Utah began surveying wildlife populations after a breakout of the COVID-19 SARS-2 virus in domestic mink farms.  They found one wild mink who had contracted the virus, apparently from contact with farmed mink.  Interspecies infection has been a hallmark of the SARS-2 Cov2 virus from the start.  Nevertheless, the new finding raises questions about what impact the pandemic might have on wildlife populations.  Tony Goldberg is a Professor of Pathobiological Sciences at the UW School of Veterinary Medicine and Associate Director for Research at the UW Global Health Institute.