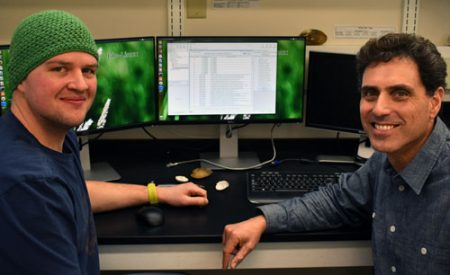 Flowing out of the southern Appalachians, the Clinch River winds between mountains covered by forests and dotted with small farms. Here in southwestern Virginia’s coal country, forests blaze in reds, oranges and yellow each fall. The river, broad and shallow, is home to one of the most diverse population of animals in the northern hemisphere.

This is where Jordan Richard, a U.S. Fish and Wildlife endangered species biologist, is one of the biologists responsible for preserving and protecting the 255 unique aquatic species in the Upper Tennessee River Basin — he calls it the “headwaters of southeastern biodiversity.” More than 80 of those species are freshwater mussels: 32 are protected, 24 are imperiled, and Richard is trying to understand why thousands of mussels are dying each year.

As recently as 2015, Richard and members of his team could each round up as many as 10 pheasantshell mussels in 15 minutes in places like Kyle’s Ford, home to a wildlife management area created to preserve its diversity of freshwater mussels. Now, his whole team might find just five pheasantshells after searching for more than four hours. The pheasantshell population collapsed in 2016 — losing 90 percent of its number — and they continue to die.

Poor water quality and toxins are well-known threats to mussels, but this time, the usual suspects don’t seem to fit. Something has changed, and mussels are dying like never before in the Clinch River and across the country, including Wisconsin. “This is not a natural thing, not a human-induced toxic spill, not a point source (of pollution),” Richard says. “Based on our usual tests, there is nothing obviously wrong with the river, and other species are thriving. Disease makes sense.”

Enter the Mussel Mortality Response Team, a collaboration among a half dozen biologists, microbiologists, pathologists and epidemiologists from the University of Wisconsin-Madison, the U.S. Fish and Wildlife Service in Wisconsin and Virginia, and the U.S. Geological Survey in Wisconsin, including the USGS National Wildlife Health Center in Madison. In a research first, they’re looking at whether infections might be killing mussels, either alone or in combination with other factors. The results will help them develop diagnostic tools, leading to better health at mussel hatcheries and, potentially, a way to identify and head off problems in the wild.

Tony Goldberg, an epidemiologist and professor in the UW–Madison School of Veterinary Medicine, is part of the team and has the technology to check for viruses and other pathogens. “We suspect that one of the causes of these mass declines might be infectious disease,” he says. “The problem is, we know almost nothing about the diseases of freshwater mussels.” Goldberg, who is also an associate director at the UW-Madison Global Health Institute, is well-known for his studies of infections in everything from fish to apes as he tries to determine the causes of disease and help identify possible remedies.

“Freshwater mussels are among the most biodiverse, beautiful and ecologically important animals in the U.S., yet few people even realize they exist.” —Tony Goldberg

North America is home to 300 mussel species, more than anywhere else in the world, and historic accounts tell of river bottoms paved with mussels. Today, more than 70 percent are listed as imperiled, at risk or endangered. Pollution and poisons from manufacturing have taken their toll. Mother-of-pearl button manufacturing in the early 20thcentury decimated whole populations. But those familiar culprits don’t account for what’s happening now, the researchers agree.

Mussels nestle in riverbeds, mostly going unnoticed. Mass die-offs — unlike hard-to-ignore big fish kills — are also hidden but need the same attention. Consider this, Goldberg says: “What does it mean for humans if thousands of animals are suddenly dying in our drinking water — and the problem is widespread? This could be an example of an infectious disease that doesn’t affect humans directly but impacts us indirectly by damaging eco-system services such as water filtration. That definitely does impact human health.”

Continue reading this story on the Global Health Institute website.