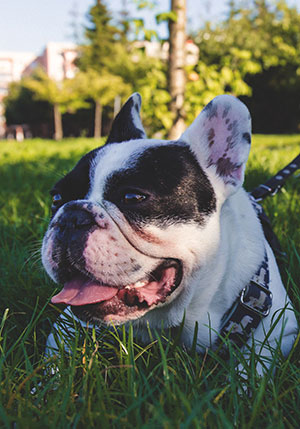 As warmer weather approaches in the Midwest and other parts of the country, pet owners should be aware of several heat-related threats to pet safety. Corinne Lawson, an Emergency and Critical Care clinician with UW Veterinary Care, shares the following precautions.

Exercise: At the first sign of nice weather, the temptation to romp and explore outdoors can be hard to ignore. But doing so without proper conditioning, or amidst large temperature fluctuations or hot weather, can cause injury. “If you have a dog that is conditioned and used to exercising with you, they’re probably going to be okay on a typical run or walk. But if it’s a hot day, you need to be careful,” says Lawson.

A rule of thumb (or paw): Don’t assume that your dog is okay just because they keep pulling or running. “They will keep going because they’re having fun, especially dogs that have been cooped up in the house over the winter,” Lawson says. “Take breaks and recognize your dog’s limitations. If you’re hot and having a hard time, they are too. And if you’re going to have water, they should too.”

Another note: Dogs don’t perspire like humans. Rather, they cool off by panting, so they must be able to open their mouth when warm. If using a Gentle Leader or similar headcollar that circles a dog’s mouth, be sure that it doesn’t restrict the ability to pant.

Short-nosed dog breeds: Bulldogs, pugs, and other brachycephalic breeds of dog with compressed noses and skulls are less tolerant of warm temperatures and can be prone to potentially fatal heat-related conditions. Tissue around the airway can become inflamed and interfere with breathing in these breeds (heard as a snorting sound). “When the dog gets hot and starts panting, tissue starts to swell, and it can actually obstruct their airway,” Lawson explains.

Owners of short-snouted dog breeds must pay special attention to their pet’s well-being during activity in warm environments. “If an owner ever starts hearing their dog’s breathing change, they need to give them a break and let them cool down,” Lawson says. And any respiratory distress, or difficulty breathing, should be treated as an immediate emergency.

Car safety: No animal should be left unattended in a vehicle during warm weather due to the fast rate at which temperatures can rise to unsafe levels. Short-nosed dog breeds are especially susceptible. “People don’t realize how warm it can get,” says Lawson. In addition, leaving an animal with the air conditioning on or the windows partially down does not guarantee they won’t get into trouble. According to the American Society for the Prevention of Cruelty to Animals, on a 70-degree day, a car’s interior temperature can reach 90 degrees. And on an 85-degree day, it takes only 10 minutes for a car’s interior to top 100 degrees.

Hydration: Access to water is essential for pets when walking or traveling in warm weather. Plan ahead to not only have water with you, but to also have a few options available to offer it to your pet. “My own little dog doesn’t like drinking out of a bowl on walks, but he likes drinking out of the cap of the water bottle,” says Lawson. For other dogs, drinking out of your hand might do the trick. “If one thing doesn’t work, try another.”

Likewise, don’t presume that your dog will take a refreshment break amidst the excitement of an adventure. “A lot of dogs — my dogs included — do not want to drink water while they’re on a walk. So in warm weather I make sure we don’t walk far and I pay close attention to how they are doing,” Lawson says.

If you’re in an area with natural water and your dog is starting to get overheated, feel free to allow them to stand in the water to cool down, Lawson says. However, it is very important that you monitor your dog closely and not allow them to lay down or go in too deep (only up to the lower part of their chest). If they don’t seem to be cooling down, or start getting weak, lethargic, or having any difficulty breathing, it is very important that you get them to a veterinarian as soon as possible.

Sore feet: In warm weather, hot asphalt can burn a dog’s paw pads, so walk your dog on grass when the option is available. If the ground is hot or of rough terrain, long walks or runs can also wear down a dog’s paw pads or cause abrasions.

“Dogs will just run and run and you don’t realize it’s a problem until they’re limping,” says Lawson. Be conscientious of the duration of walks or runs and check your dog’s paws frequently, she suggests. “If you see any sign of lameness, check their feet. If they’re starting to get raw, at that point you need to be done.” If you run or hike frequently with your dog, booties can help to protect the paws.

Insect bites: Just as with people, pets can have anaphylactic reactions to bee stings and other insect bites. Have Benadryl on hand in case your animal begins to have an allergic reaction and know the proper dose for your pet in advance, Lawson advises.