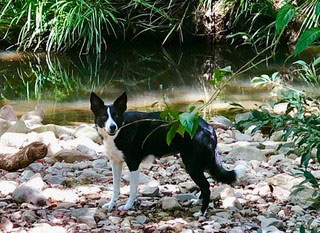 Although highly effective vaccines are available against canine parvovirus and canine distemper virus, large numbers of dogs around the world die of these infectious diseases annually. Puppies and young dogs in their first year of life are the most frequent victims of the viruses.

Tessa, a border collie living in Australia, is expecting a litter of puppies in May. Her breeder, Francisca, wants to be certain that the pups will be immunized appropriately against parvo and distemper, so she called in help from across the globe at the University of Wisconsin–Madison School of Veterinary Medicine. The school’s Companion Animal Vaccines and Immuno Diagnostics Service (CAVIDS) Laboratory is a world-renowned leader in the study of companion animal infectious disease and clinical immunology.

Tessa had a small amount of blood drawn in Australia, then a sample of her blood serum was shipped nearly 10,000 miles to the CAVIDS lab for a nomograph test. This analysis estimates the amount of maternal antibody a mother dog will pass to her puppies through colostrum (the first milk) in the hours following birth. This is valuable to know because while maternal antibodies provide an important immune defense against disease for puppies during the early weeks of life (with the antibodies eventually breaking down), they also block successful immunization and are one of the main reasons for puppy vaccination failure.

“Nomograph testing helps us understand the best timing of vaccination to assure a litter will be effectively immunized,” says Laurie Larson, a veterinarian and immunization expert who leads the CAVIDS lab.

The test results will help Tessa’s veterinarian create a tailored vaccination schedule for the puppies and will allow the litter to receive follow-up testing, to measure their immunity after receiving vaccines, at an earlier age than would otherwise be possible.

“For many owners, knowing for certain that their puppy has responded well to vaccination brings peace of mind,” says Larson.

Over the past ten years, CAVIDS has provided antibody tests for thousands of breeding dams (mother dogs), puppies, and sheltered and pet dogs and cats from 49 American states, 5 Canadian provinces and now, Australia.

The lab performs titer tests for antibody (a protective protein produced by the immune system in response to the presence of a foreign substance) against feline and canine parvovirus and canine distemper virus. Because there is a high correlation between the presence of antibody and protective immunity against these deadly diseases, Larson says the tests are highly effective tools to prove immunity.

Antibody test results can help pet owners avoid over-vaccination of already immune pets, thus reducing the risk, though low, of adverse vaccine reactions. And for animal shelters experiencing an outbreak of these diseases, titer tests allow animals who are protected from disease to be adopted to new homes, and susceptible animals to be quarantined and treated.

While several laboratories in the United States offer quantitative titer testing, CAVIDS is currently the only lab worldwide that also offers nomograph calculation for breeding dams, as well as follow-up titers for puppies whose moms were tested previously.

In addition to testing services, the lab performs education and outreach aimed at informing pet owners and veterinarians about appropriate vaccination and immunity.

“Our overarching mission is to improve the health of dogs and cats worldwide,” Larson says.

In Australia, Francisca heard about CAVIDS through word of mouth, noting that the lab is well known among hobby dog breeders around the world. She says she is grateful to have Larson and the SVM as a resource for this testing, since it is not available in her country.

“Tessa and I and her babies cannot thank them enough,” she says. “I am excited about the possibilities for future breeders in Australia.”