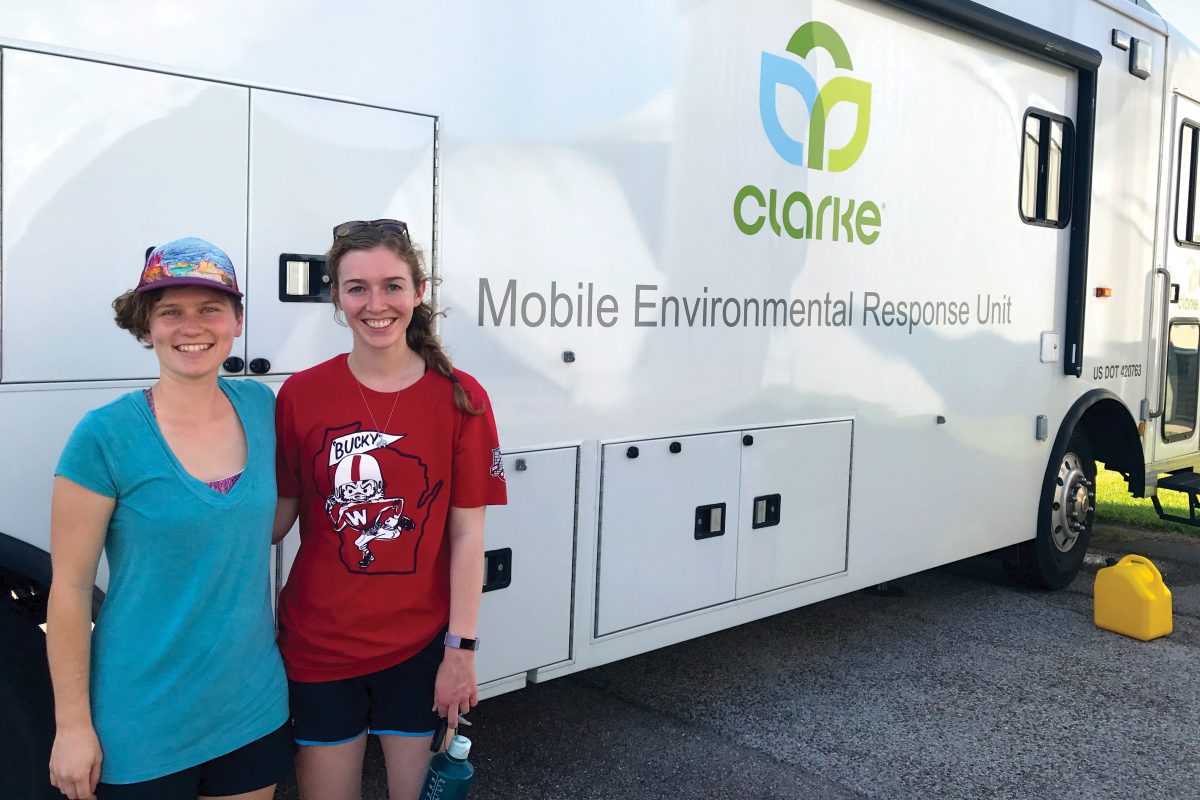 To assist ongoing mosquito-control efforts, two University of Wisconsin–Madison students, Melissa Farquhar DVMx’20 and Erin McGlynn, have flown to Texas to help trap and identify mosquitoes. Part of the new Upper Midwestern Regional Center of Excellence for Vector-Borne Disease housed at UW–Madison, the students will monitor for disease-spreading species of mosquitoes and determine the effectiveness of control efforts.

Farquhar, a veterinary medicine student from San Jose, California, and McGlynn, a medical and master’s in public health student from Wisconsin Rapids, Wisconsin, have been made temporary employees by Clarke, the mosquito control company contracted by Texas. Illinois-based Clarke, a partner in the vector-borne disease center, hired the students to assist their employees, who are overwhelmed by unprecedented numbers of mosquitoes. Joined by a third center trainee from Iowa, Brendan Dunphy, Farquhar and McGlynn are gaining hands-on experience in disaster response while contributing to public health efforts.

The public-private partnership took shape quickly. Just days after Clarke entomologist Rajeev Vaidyanathan reached out to center co-directors Susan Paskewitz and Lyric Bartholomay PhD’04, McGlynn, Farquhar and Dunphy were hired and on their way to Texas. The students will be in Houston from Sept. 13 to Sept. 21.

“They took us to the lab right away to start identifying mosquitoes,” says McGlynn, who has studied entomology and disaster preparedness during her graduate work. “I think we were both surprised how little overlap there was in mosquito species between Wisconsin and Texas.”

Operating out of a mobile lab, the trainees have been given a crash course in Texas mosquitoes and spent long days identifying mosquitoes brought in by Clarke’s trapping crew. Traps are set up from Houston to Corpus Christi.

“The problem in Texas is not a disease situation at this point, but it is an enormous output of nuisance mosquitoes. And those mosquitoes are very serious, because they prevent people from doing the cleanup work that needs to be done,” says Paskewitz, a UW–Madison professor of entomology.

The floodwater mosquitoes that Texas is dealing with lay eggs in the soil that hatch and develop into adults quickly after floods. The widespread flooding produced by Hurricane Harvey has led to far more mosquitoes emerging than normal. While a mosquito trap might typically collect 10 to 20 mosquitoes in a night, workers are finding several thousand per trap now in areas around Houston.

While these floodwater species of mosquitoes do not typically spread diseases such as West Nile virus and Zika virus, standing water left behind by receding floodwaters could harbor disease-spreading species. Texas had one case of Zika virus transmitted locally by mosquitoes earlier this year; most cases of Zika infection in the United States are in people who have traveled outside the country.

All of the mosquitoes that are collected must be identified and reported to regional health authorities, in part to determine the abundance of disease-spreading species. McGlynn, Farquhar and Dunphy, already trained in mosquito identification, will help keep pace with the increased demand.

“I think this (partnership) really fulfills the mandate of the CDC, because part of the CDC award that the Midwest center received is to provide hands on, real-world training for vector biologists,” says Vaidyanathan, Clarke’s director of environmental science.

“I think it’s a really unique experience to see how companies like Clarke deal with disaster relief,” says Farquhar, who spent the summer researching vector-borne diseases in animals at the UW–Madison Arboretum.

“If the center wasn’t here,” McGlynn adds, “I’m not sure we would’ve had this opportunity.”