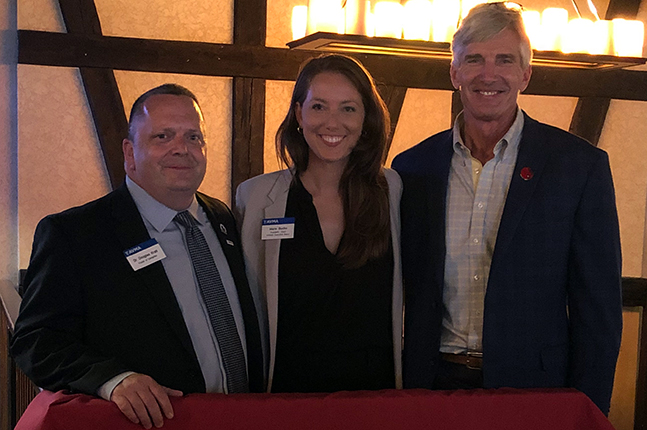 When Douglas Kratt was selected as president-elect of the American Veterinary Medical Association (AVMA) at the group’s 2019 convention in August, he rounded out a trifecta of leaders in the state of Wisconsin and with connections to the UW–Madison School of Veterinary Medicine (SVM) who in 2020 will direct three leading organizations representing the field of veterinary medicine.

“It’s an exciting testament to the impact that Wisconsin and the university have on the veterinary medical profession by the election of an SVM alumnus, student and faculty member into these roles,” says Markel.

​​Kratt, a 1998 graduate of the UW School of Veterinary Medicine, is a small animal practitioner from La Crosse, Wisconsin, where he is owner of the Central Animal Hospital. Prior to his election as AVMA president-elect, he served as Wisconsin’s delegate in the AVMA House of Delegates and president of the Wisconsin Veterinary Medical Association. He has also served on AVMA’s House Advisory Committee, Strategic Management Committee and Task Force on Volunteer Engagement.

The AVMA, founded in 1863, is one of the oldest and largest veterinary medical organizations in the world, with more than 93,000 member veterinarians worldwide. Kratt will officially begin his term as AVMA president during the 2020 convention, which takes place in San Diego from July 31-August 4.

Markel will be installed as president of the Association of American Veterinary Medical Colleges at the AAVMC’s 2020 Annual Conference, to be held in March in Washington, D.C. The nonprofit organization works to protect and improve the health and welfare of animals, people and the environment around the world by advancing academic veterinary medicine. Members include 50 accredited veterinary medical colleges in the United States, Canada, Mexico, the Caribbean, Europe, Australia, South Korea and New Zealand.

Markel joined the UW–Madison faculty in 1990, conducting research in comparative orthopedics. He was appointed as SVM dean in 2012 and previously served as chair of the school’s Department of Medical Sciences and associate dean for advancement. He is a Diplomate of the American College of Veterinary Surgeons (ACVS) and past president of the ACVS Board of Regents. He also serves as the worldwide veterinary representative on the board of directors for the AO Foundation, the world’s largest nonprofit orthopedic foundation.

Bucko, from Brodhead, Wisconsin, will assume the presidency of the Student American Veterinary Medical Association at the 2020 SAVMA Symposium in Ithaca, New York in March. She is a member of the UW School of Veterinary Medicine’s Class of 2021 and also chairs the SAVMA Government Affairs Committee. Prior to veterinary medical school, she worked at the Food and Drug Administration and U.S. Department of Agriculture in Washington, D.C.