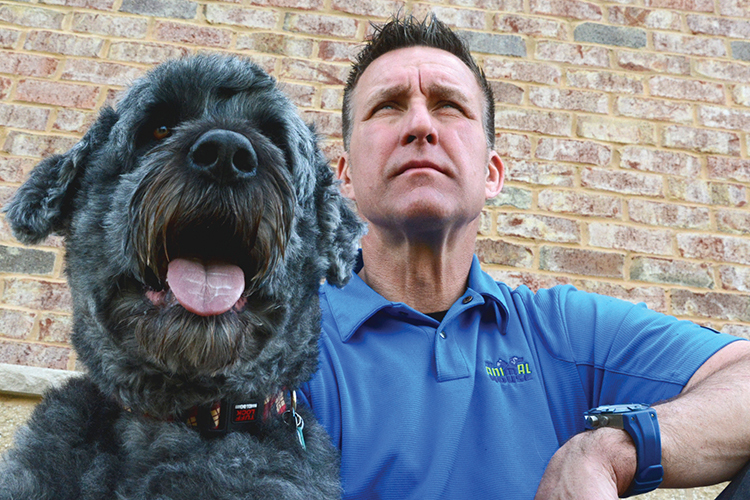 Patrick Warpinski DVM'91 is the owner and operator of The Animal House, an award-winning Green Bay animal services business that he established in 2004. Along with providing veterinary medical care, boarding, grooming, and training, The Animal House initiated a local partnership with Paul’s Pantry to provide low-cost pet care for individuals in need.

When is a veterinarian more than a veterinarian? When they show as much care for people as they do for animals. That definitely defines Patrick Warpinski DVM’91.

Warpinski is the owner and operator of The Animal House, an award-winning Green Bay animal services business that he established in 2004. Along with providing veterinary medical care, boarding, grooming, and training, The Animal House initiated a local partnership with Paul’s Pantry to provide low-cost pet care for individuals in need.

“My wife and I are proud to contribute to the greater good in Green Bay and the surrounding area,” says Warpinski. “We’re always looking for ways to care for the community as a whole — not just pets.”

Along with Paul’s Pantry the Warpinskis donate to the local YMCA summer camp programs that help kids stay on the right track and sponsor a miniature veterinary medical clinic in the Green Bay Children’s Museum, among a variety of other charitable endeavors. “We do it because it’s the right thing to do,” Warpinski says.

When it came time to attend college, Warpinski also knew what to do. “It was UW–Madison or nothing for me,” he says. “Academically, it’s obviously a topnotch school. And I couldn’t have gotten a better veterinary medical school education any place other than Wisconsin.”

Warpinski earned his bachelor’s of science and doctor of veterinary medicine degree from UW–Madison. But when he first enrolled, he didn’t necessarily know those would be the degrees he’d earn or the career path he’d take.

“I used to spend lots of time on our family farm,” he says. “And I liked science, so I thought that maybe this is what I should do, and I made an effort at achieving that goal.”

He achieved that goal and more. Most recently, Warpinski was named president of the Bay Area Humane Society, and he traveled to China in 2015 to participate in the pilot Nobivac Global Health Veterinary Exchange program. He was one of 10 veterinarians across the world chosen to participate in the program, which offers the chance to visit other clinics around the globe to exchange knowledge and experience.

“I learned to take nothing for granted while at UW–Madison, and that I can do whatever I put my mind to,” says Warpinski. “And that’s helped give me an attitude of perseverance that I’ve used to achieve many of these things in my life.”

Editor’s Note: This alumni profile originally appeared on the University of Wisconsin–Madison’s comprehensive campaign website, allwaysforward.org, as part of a series highlighting connections between the campus and each of Wisconsin’s 72 counties. The series featured several alumni of the UW School of Veterinary Medicine. We highlighted Kurt Hallgren DVM’02 in the September/October 2016 issue of our Alumni E-news, Margaret Meier Jones DVM’96 in the Spring 2017 issue of On Call, as well as Warpinski and Chelsea Retaskie DVM’14 in the Summer 2017 issue of On Call.