Emma Sweet DVMx’22, the inaugural recipient of the Veterinary Medicine Diversity, Equity, and Inclusion Scholarship, believes that substantial, meaningful progress comes from purposeful action, and action is needed to increase access to the profession.

“People generally go into this field because they care. They want to work with animals, and they want to help the people behind the animals,” Sweet says.

However, a number of financial and social barriers continue to deter individuals from marginalized communities from pursuing an education in the profession. The UW School of Veterinary Medicine (SVM) introduced the Diversity, Equity, and Inclusion Scholarship Endowment Fund to remove some of those barriers and support underrepresented populations.

Sweet was the first scholarship recipient in the 2020-21 academic year; Erika Kwong DVMx’22 received the 2021-22 scholarship.

Sweet notes her appreciation for the SVM’s efforts to provide numerous types of financial aid with the specific needs of the student body in mind.

“They take into account people’s financial backgrounds and people’s interests,” she says.

Upon her admission three years ago, Sweet readily involved herself in student organizations that, like the scholarship, aim to address social disparities within the school and profession.

In 2019, she became the local vice president of Broad Spectrum — now known as Pride Student Veterinary Medical Community (SVMC) — a national group supporting lesbian, gay, bisexual, transgender, and queer or questioning (LGBTQ) veterinary students. The group operates under the umbrella of Veterinarians as One Inclusive Community for Empowerment (VOICE), a national student-run organization with local student chapters that seeks to increase awareness, respect, and sensitivity to differences among all individuals and communities in veterinary medicine.

“People generally go into this field because they care. They want to work with animals, and they want to help the people behind the animals.”

“Veterinary medicine, as a whole, is a field that’s overall not very diverse. It’s one of the whitest professions that there is, statistically speaking. And, right now, it’s one of the few professions that is predominantly female. That was a transition that took place just within the last decade or two,” Sweet explains.

Nationally, the number of racially and ethnically underrepresented DVM students currently stands at about 20 percent of total enrollment — a figure that continues to rise. According to the most recent US Census in 2020, almost 40 percent of people in America identify as racial or ethnic minorities.

Among the UW School of Veterinary Medicine’s two most recent incoming classes, students from underrepresented racial and ethnic groups represent one-quarter of the class. The Class of 2025, in particular, is the most diverse class the school has ever had.

For years, the SVM has taken steps to create a more diverse and inclusive culture. Under the leadership of Richard Barajas, director of diversity, equity, and inclusion, the school remains focused on increasing the representation and inclusion of minoritized groups and creating teaching, learning, and work environments that support diversity.

Numerous efforts are underway to help prospective students from underrepresented populations learn more about veterinary medicine, recruit a diverse population of students, and support students’ success. This is in addition to school initiatives to recruit and retain a diverse workforce.

“There’s always room for growth,” Sweet adds. “There are things I would love to see change, but with anything systemic, it takes time.”

With that holistic vision in mind, in 2020, Sweet accepted a position on the VOICE chapter’s executive board as president of Broad Spectrum. Board members compiled a reformation plan made up of administrative requests related to the academic and social environment of the SVM. The plan addressed issues like gender-neutral bathrooms and accessible grading policies, which includes ideas such as eliminating graded attendance rules and offering additional recorded lectures.

“There’s always room for growth. There are things I would love to see change, but with anything systemic, it takes time.”

Sweet emphasized the importance of leaving behind a living, breathing document — like the detailed plan she and her peers collaborated on — for future generations of veterinary medicine students to build on.

“That was a huge project for us — a personal project that I, my classmates and colleagues were passionate about,” Sweet says. “We’re only here for four years. We can try and make something that lives beyond us. Because it’s kind of difficult to create change when people cycle in and out so quickly.”

For Sweet, the significance of that inter-class support became pronounced further when she considered her educational experiences in contrast with those of the faculty now teaching her.

“I’m going to school now, in the 2020s, and being openly queer is easier than it would have been for some of my faculty who have told stories of when they went to vet school and it was a horrific time for them. I’m not going to say it’s perfect now, because it’s not. But I don’t feel scared,” she says.

Asked to look into the future, Sweet solidified her desire to stay involved after graduation and increase inclusion efforts in the workforce. Sweet will relocate to Milwaukee, a diverse but highly segregated city, where community outreach and engagement will remain a priority for her regardless of which area of veterinary practice she ends up in.

“If I make it big enough one day,” Sweet says, “I’ll hopefully set up my own scholarships.”

Supporting Students of Today and Tomorrow

Gifts have long driven substantial commitments to scholarship support for students at the UW School of Veterinary Medicine. And in the 2020-21 academic year, the school was thrilled to launch several new opportunities to benefit students. 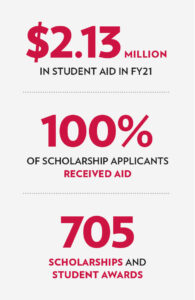 Kristen Bernard MS’92 PhD’95, a professor of virology in the School of Veterinary Medicine, and her husband Rick Ezell provided a generous lead gift to establish the Veterinary Medicine Diversity, Equity, and Inclusion Scholarship Endowment Fund. This scholarship fund and the School of Veterinary Medicine Diversity, Equity, and Inclusion Fund, to support greatest needs in these areas, will help bolster the school’s efforts to create a more diverse and inclusive culture within the school and increase the representation of underrepresented populations.

“Diversity is so important to bring different backgrounds and ideas to solve problems facing our society and to better serve our clients and animal patients,” Bernard said at the time of her and Ezell’s gift.

In addition, Bradley Poff DVM’87 led a collective effort among peers from the Class of 1987 to establish the SVM Charter Class of 1987 Scholarship Fund.

In total, in 2020-21, the SVM provided 705 scholarships and student awards for a combined $2.13 million in student aid. A full 100 percent of scholarship applicants received aid.

Providing students with generous financial aid awards, in addition to presenting focused financial training at crucial points in the education, is a critical priority as the school and greater veterinary medical community work to address veterinary medical student debt and the financial health of the profession.