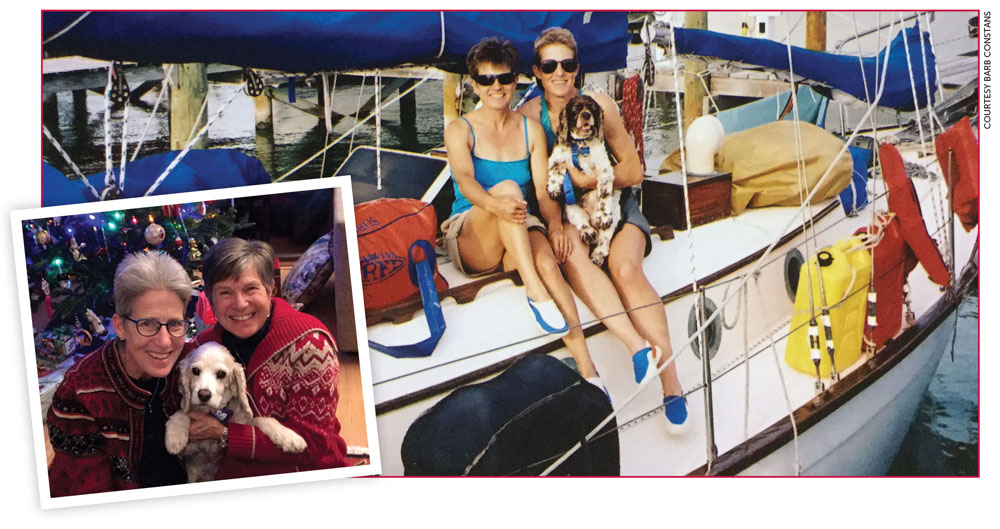 How many dogs have sailed from the Midwest to the Caribbean and back again? Zephyr for one.

For nine months beginning in fall 2002, the little parti-color cocker spaniel was one-third of a seafaring crew aboard a 31-foot vessel.

“It was a great adventure,” says Barb Constans, who made the journey with her wife Deb Rohde and Zephyr.

In many ways, Zephyr was a natural at sea. Perhaps because she was named for a warm west wind, “which is always our favorite breeze,” says Constans.

During stormy weather on the boat, Zephyr would head below deck, burrowing in blankets under the boat’s navigation station. “She could crawl in and nest during the worst of whatever it is we were going through,” says Constans. “She had an ironclad stomach and did better in storms and rough weather than I did,” adds Rohde.

That Zephyr was able to make the trip and take in her surroundings is a credit to UW Veterinary Care, Constans says. “She got to see every island that we went to in the whole of the Caribbean, and, wow, she had a wonderful adventure with us because of the vet school.”

In the early 2000s, Zephyr developed dry eye, a condition that causes eye redness, pain, and irritation due to decreased tear production. Her local veterinarian referred her to UW Veterinary Care’s Ophthalmology Service. According to Constans, this was before dry eye was commonly treated in dogs, but UW Veterinary Care clinicians helped arrive at a diagnosis and treatment.

“She got to see every island that we went to in the whole of the Caribbean, and, wow, she had a wonderful adventure with us because of the vet school.”

The hospital’s pharmacy sourced for Zephyr cyclosporine eye drops, used to treat dry eye by increasing tear production and reducing inflammation. When the medication became unavailable due to a shortage ahead of the family’s sailing trip, the pharmacy worked to compound enough eye drops to last through their travels.

“The vet school basically saved her eyesight,” says Constans. “Without that treatment, Zephyr would have been a blind dog.” (Chronic dry eye, without treatment, can cause eye ulcers and blindness.)

Zephyr’s sight wasn’t the only sense she utilized at sea, often positioning herself at the boat’s bow to survey the scene. “She was our little radar station,” Constans jokes. “She would smell land before we could see it,” adds Rohde.

The couple recalls one time, as they neared the Dominican Republic, when “all at once Zephyr’s nose popped up and she started pacing the deck. And about a half-hour later we could begin to see this little sliver of land,” says Constans.

Likewise, Zephyr often forecasted dolphins’ arrival moments before they could be seen at the water’s surface. “All of a sudden, her ears would perk up and she would be looking, and then suddenly we could see the dolphins,” says Rohde.

“Zephyr was an amazing little dog,” adds Constans. It was with gratitude for the dedication shown to Zephyr by UW Veterinary Care staff that Constans began making annual gifts to the School of Veterinary Medicine in 2004. Following Zephyr’s passing in 2006, the couple purchased a memorial brick outside of UW Veterinary Care to honor their “forever-loved sailor dog.”

Constans and Rohde have continued to support the school annually and have utilized UW Veterinary Care services for more than 16 years. Their next cocker spaniel, Gracie, had surgery at the hospital to repair a luxating patella, followed by physical therapy. She also visited the Ophthalmology Service for the treatment of glaucoma. Later in life, she was seen by the hospital’s Cardiology Service for rechecks and management of lifelong heart conditions.

“We were frequent fliers,” says Constans. “It was wonderful to have those specialists.”

Like Zephyr, Gracie earned her sea legs — often sailing on Lakes Mendota and Michigan — and also came to enjoy traveling in a bike trailer. “We’re pretty active people,” says Rohde. “We like to bike, hike, kayak, and sail. And the dogs do what we do.”

Sadly, Gracie passed away from cancer in April at the age of 15. This summer, the couple welcomed into their home Paris, a 1-year-old black cockapoo who happens to share the same March birthday as Constans. The adopted dog’s name embodies the couple’s traveling spirit — an aspiration to one day travel to Paris with their dog by their side.

Now in retirement after careers with UW Health and the City of Madison, the couple recently chose to include the School of Veterinary Medicine in their estate bequests.

“A lot of our lives have circled around our pets so the vet school just seemed an obvious choice as one of our major aid organizations when we’re gone.”

“When we were doing retirement planning and thinking about our future, we decided that we needed to pick a couple of larger things that have had a long-term impact on our lives,” explains Constans. “We both love animals. We both think that our lives were greatly enriched by Zephyr, Gracie, and now Paris, and Topaz before all of them, and the vet school made a lot of that possible.”

“A lot of our lives have circled around our pets so the vet school just seemed an obvious choice as one of our major aid organizations when we’re gone,” she adds.

In addition to Constans and Rohde’s legacy living on through long-term giving, Zephyr’s carries on as well.

“We named the sailboat that we keep here on Lake Mendota ‘Zephyr,’ so Zephyr is still sailing with us every time we go,” says Constans. “We don’t like to forget them.”