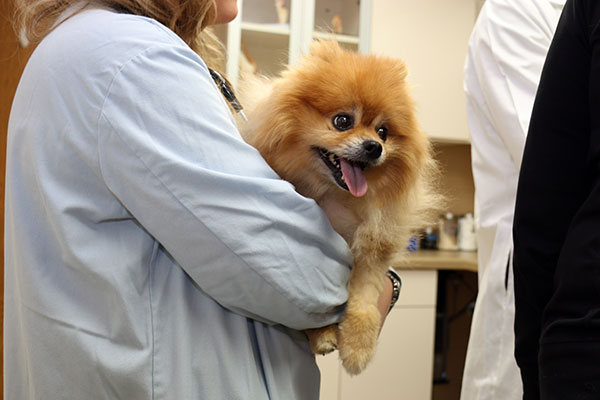 On an otherwise ordinary fall morning, Michael Kern stepped out of the shower to find Foxy, the family’s 11-year old Pomeranian, lying on the bathroom floor, unable to stand.

Kern and his wife, Judy Geier, rushed Foxy to their local veterinarian in Loves Park, Illinois, and then on to UW Veterinary Care’s Emergency Service. In Madison, X-rays and an MRI revealed that a herniated disc between the vertebrae in Foxy’s neck was compressing her spinal cord, causing temporary paralysis.

Herniated, or ruptured, discs are common in dogs, most often a result of degeneration (aging). Surgery can alleviate the condition, but Foxy faced another major concern: tracheal collapse, in which the cartilage within the trachea weakens and breaks down, restricting the airway.

Dogs with tracheal collapse often still manage day-to-day life well, but the narrowed airway can impair an animal’s ability to recover from anesthesia, explains Jonathan Bach, director of emergency and critical care services. “I was pretty worried when I saw in the X-rays how narrow her trachea was,” Bach recalls. “We preemptively warned Michael and Judy that Foxy might need a tracheal stent to be able to survive and get through all this. And that’s exactly what happened.”

In the hours following surgery to repair Foxy’s spinal cord injury, she began having increased trouble breathing and had to be placed on a ventilator. After consulting with Kern and Geier, Bach implanted a stent — a small, self-expanding tube, woven with flexible metal wire — into Foxy’s trachea to restore the normal diameter of the space.

Foxy’s condition slowly improved over eight days in the Critical Care unit, with coordinated care from the Neurology Service.

“She had major spinal cord compression and it takes time — sometimes a few days, sometimes several weeks — for animals that are decompressed with surgery to be able to regain neurologic function,” Bach explains.

Foxy’s family, which includes another Pomeranian, Bear, visited multiple times each day during her hospitalization. “We just wanted to make sure she saw us, to give her a reason to fight,” says Kern.

Foxy has done well in the months following and is back to enjoying walks, playtime, and primping.

“She never would have made it if it wasn’t for you,” Geier told Bach at a recheck appointment in October, noting her and Kern’s gratitude to the entire UW Veterinary Care team. “Everybody here, from beginning to end — I’ve never seen anything like this place.”