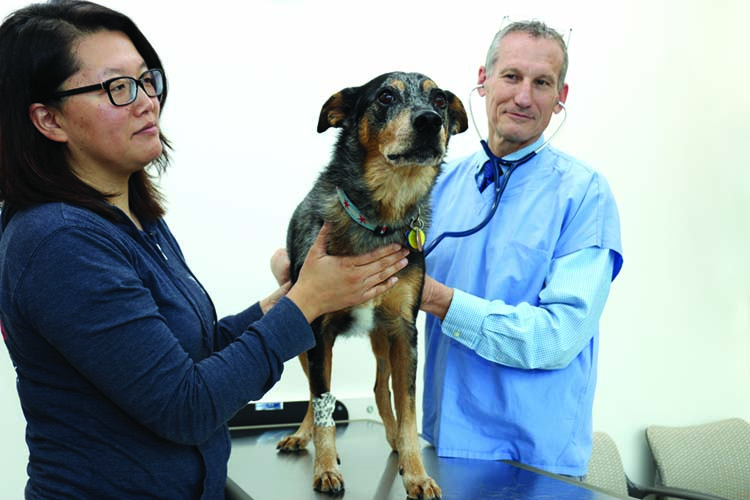 UW Veterinary Care oncologist David Vail examines Senna, an 8-year-old Catahoula Leopard Dog held by owner Caitlin Junj. In September, Senna received his final chemotherapy treatment for multicentric lymphoma, a common cancer in dogs. A five-year clinical trial launched this fall will test a novel vaccine for the prevention of many types of cancer – a potential paradigm shift in veterinary and human medicine.

Could the body’s own immune system be primed to prevent cancer through a quick vaccine? A clinical trial launched this fall aims to bring new clarity to this complex question.

The Vaccination Against Canine Cancer Study will evaluate a vaccine strategy for the prevention, rather than the treatment, of cancer in dogs. With more than 800 patients enrolled as participants, it is the largest clinical trial conducted to date for canine cancer and across the history of veterinary medicine. The UW School of Veterinary Medicine is one of three participating institutions, together with Colorado State University and the University of California, Davis.

Cancer is the number one cause of illness and death in the aging dog population, with approximately one out of every three dogs affected and six million new cancer diagnoses made in dogs each year. If the trial is successful, it could not only provide a new strategy to prevent a critical health concern in canine companions, but it could also provide justification for studying a similar approach in people.

“The holy grail would be to prevent cancer as opposed to waiting for it to start and then treating it,” says Vail, who is also a member of the UW Carbone Cancer Center.

Much like an influenza vaccine bolsters the body’s readiness to fight the flu, this preventative cancer vaccine follows the same principle — “to have the immune system primed such that if a cancer cell develops, it will attack,” Vail says.

Traditionally, vaccines work by introducing into the body a protein found on the surface of the virus that the vaccine is protecting against. The immune system sees the protein as a threat, establishes a memory of it, and then, if there is a later infection, recognizes that protein and is primed to react.

If this works, or even if this is one step in the correct direction, I will be thrilled. With the possibility to prevent several cancer types before they develop, somebody absolutely needs to do the study.”

“It’s almost like putting up a wanted poster for that particular virus,” Vail explains. “When that virus infects you, then the immune cells recognize it because of the ‘poster,’ go out, and kill it.”

The anticancer vaccine now being tested targets approximately 30 abnormal proteins found on the surface of cancer cells. These proteins, a result of improperly coded RNA (so-called frame-shift mutations), are generally only found in patients with cancer (both dogs and people) and are agnostic of cancer type, meaning that a patient with breast cancer has the same abnormal proteins as a patient with bladder cancer. By injecting this cluster of proteins into healthy patients, along with a substance that stimulates an immune response, it’s theorized that the vaccine could serve as a universal defender against cancer by “turning on” the immune system.

“Those proteins act as the wanted poster for the good guys, the killer cells, to be primed so that if they ever were to see that abnormal protein develop in a patient, they’re already primed to recognize it as bad,” Vail explains. “They have little receptors that will fit that protein, come along and attack the cancer cell, and essentially explode the cell.”

Stephen Johnston, a professor at Arizona State University and director of the Center for Innovation in Medicine, developed the technology behind the vaccine.

Several cancers that are common to dogs are targeted by the vaccine, including lymphoma, a cancer of the lymphatic system; osteosarcoma, or bone cancer; hemangiosarcoma, a deadly cancer that originates in the blood vessels and is almost exclusive to dogs; and mastocytomas, or mast cell tumors.

The potential to preventively target several types of cancer at the same time with a single vaccine series would be a revolutionary development and a major paradigm shift in veterinary and human medicine, according to Vail.

“It’s a whole new way of looking at anticancer vaccines,” he says. “The key is that you don’t have to personalize the vaccine to an individual, which is a very expensive proposition. This is more of a global vaccination.”

The trial is slated to run over five years, with cancer-free, healthy dogs between the ages of six to 10 randomized to receive either a series of the investigational vaccine or placebo vaccines. Two sets of vaccines will be given every two weeks, for a total of four treatments, and then annually. While no side effects other than those typical to any vaccine, such as moderate local pain or swelling at the site of injection, have been observed in mice or dogs to date, the study will also characterize any unanticipated adverse reactions in the larger study population.

Participating dogs will live at home and be checked two to three times yearly for five years after enrollment to monitor for the development of any cancers. This medical care will be covered by the study, which is funded by a $6 million grant from the Open Philanthropic Project. About 280 dogs will be treated at UW Veterinary Care, with the remainder of participants at the other two trial sites.

“Even if a patient is randomized to the placebo group, they will enjoy five years of the best medical care available at no cost,” Vail notes. “And funds are available to diagnose and treat cancers that may develop in dogs in both the treatment and placebo group.”

A number of anti-cancer vaccines have been developed in recent decades, including by researchers at UW–Madison, for the treatment of cancer after it has been diagnosed. But those vaccines are tailored to a specific cancer type and are often produced for an individual patient, making broad deployment worldwide both time- and cost-prohibitive.

“It would be far superior of course to prevent a wide range of cancer types before they develop,” Vail says. “There will be nine million human deaths resulting from cancer in the world this year, with 70 percent of those patients in poor or third-world countries, where there’s no way they could afford the type of cancer treatment currently available. A preventative vaccine can be applied globally at low expense, so this could have a tremendous effect.”

Initial trials of the vaccine in mice suggest that this new strategy could be successful, but many in the scientific community remain unsure.

“I go in with healthy skepticism, but if this works, or even if this is one step in the correct direction, I will be thrilled,” he adds. “With the possibility to prevent several cancer types before they develop, somebody absolutely needs to do the study.”

And, Vail notes, the array of information gleaned throughout the trial will advance scientists’ understanding of cancer, the immune system, and how it responds.

“This is a team project involving dozens of researchers across the country and hundreds of pets and pet owners. We’re so thankful that they’re with us and that they want to strive to push the envelope as far as what we can do to prevent cancer in the future.”