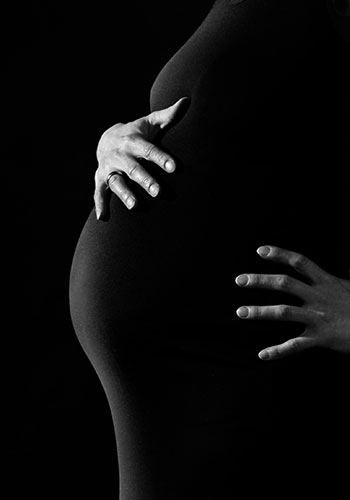 Preeclampsia is a medical condition that affects pregnant women, raising a mother’s blood pressure and threatening both her life and her baby’s. Accompanying symptoms include water retention and protein in the urine. Rarer, but more severe outcomes can include pain, headaches, nausea or even seizures, liver or kidney failure.

Most women can deliver a healthy baby if preeclampsia is detected early and treated with regular prenatal care.

No one knows the cause or how to prevent preeclampsia, yet a top-cited recent scientific review from long-time Wisconsin National Primate Research Center (WNPRC) scientific collaborators is providing some insights. The 2018 review reveals an emerging role for androgens in the pathogenesis of preeclampsia.

Sathish Kumar, an associate professor of comparative biosciences in the School of Veterinary Medicine, Jay Mishra, a postdoctoral research associate in Kumar’s lab, and other University of Wisconsin–Madison researchers published “Androgens in maternal vascular and placental function: implications for preeclampsia pathogenesis” in the October 16, 2018 issue of Reproduction.

Specifically, the researchers discovered that testosterone levels in the circulation of preeclamptic women are elevated approximately two- to three-fold and positively correlate with vascular dysfunction. Preeclampsia is also associated with elevated placental androgen receptor gene expression, the authors found.

Furthermore, animal models of preeclampsia showed patterns and levels of increases in testosterone mimicking those found in women with the disorder. Studies have been able to replicate in monkeys the key features of preeclampsia, including gestational hypertension, endothelial dysfunction, placental hypoxia, decreased nutrient transport and fetal growth restriction.

“Taken together, the clinical and preclinical data strongly implicate androgen-mediated mechanisms as an important contributor to clinical preeclampsia,” says Kumar. He adds that novel compounds that inhibit excessive androgen action might be useful to reduce the severity of hypertension and endothelial dysfunction in preeclamptic patients.

“With these confirmed animal models of preeclampsia, we can now dig deeper to uncover the etiology and pathogenesis of preeclampsia, to gain a better understanding of the disorder and advance treatments and preventions for women,” Abbott adds.

A 2017 review by WNPRC collaborators in the Journal of Endocrinology also describes the importance of the maternal vasculature to properly adapt to pregnancy to prevent preeclampsia and other hypertensive disorders. Learn more.