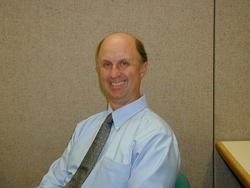 Dr. Olsen's laboratory research career at the UW-Madison School of Veterinary Medicine (1992-2012) was devoted to issues of influenza virus molecular epidemiology and pathogenesis.  In particular, his lab's work contributed to the understanding of zoonotic infections with swine influenza viruses, the molecular evolution of influenza viruses in pigs, and aspects of influenza virus infection of respiratory epithelial cells (including creation of an in vitro differentiated respiratory epithelial cell model system).  Due to administrative responsibilities, he discontinued his laboratory research program in 2011 and is no longer accepting students for laboratory research, but continues to develop field research projects in global health, with a focus on community education topics.  Dr. Olsen has published over 65 refereed research and education journal publications and reviews; 86 abstracts; and has given over 60 invited presentations across five continents.  Dr. Olsen has been principal investigator or co-investigator on nearly $6 million in research grants.

Olsen became assistant professor of public health in the School of Veterinary Medicine in 1995, was tenured and promoted to associate professor in 2001, and promoted to full professor in 2004.  He served as Associate Dean for Academic Affairs in the SVM from 2005-2012.  In this role, he managed a team of staff in the Office of Academic Affairs that are responsible for admissions to the DVM program, curriculum and other academic affairs issues, continuing veterinary medical education, and student affairs.  Dr. Olsen was tapped to become Interim Vice Provost for Teaching and Learning for the entire UW-Madison campus in 2012 and served through 2014.  In this role, he co-lead the university’s Educational Innovation effort.  In 2014-2015 he served as Acting Director of the UW-Madison Global Health Institute (GHI).  Currently he is emeritus professor in the School of Veterinary Medicine, Associate Director of the GHI, and Director of the GHI's Graduate/Professional/Capstone certificate in global health.  He also continues to serve as a program faculty member in the UW-Madison Master of Public Health degree program.