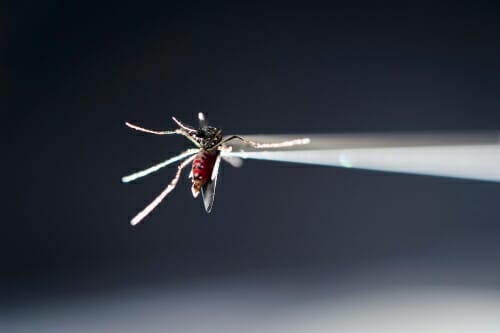 Monkeys who catch Zika virus through bites from infected mosquitoes develop infections that look like human Zika cases, and may help researchers understand the many ways Zika can be transmitted.

Researchers at the University of Wisconsin–Madison infected rhesus macaques at the Wisconsin National Primate Research Center with Zika virus one of two ways: by allowing mosquitoes carrying the virus to feed on the monkeys or by injecting virus under the skin, the common method for infecting animals in laboratory studies.

The differences between the resulting infections — reported today (Dec. 13, 2017) in the journal Nature Communications — were subtle, but will be useful as scientists continue to learn more about Zika after a high-profile epidemic in the Americas caused grave birth defects.

“It’s important in a laboratory setting to understand the difference between mosquito transmission and sexual transmission and needle inoculation,” says Matthew Aliota, a UW–Madison research professor of pathobiological sciences and one of the authors of the new study. “But better understanding these transmission routes is also important from a broader standpoint in terms of prevention and severity of disease and risk factors involved with certain behavior.”

The infection progressed faster in needle-inoculated monkeys — who had plenty of virus in their blood within two or three days — than in the mosquito-bitten subjects.

“It’s a difference of a couple days to what we call peak viremia,” says Dawn Dudley, a UW–Madison pathology research scientist. “But we still get robust infection with both methods of inoculation.”

Just why the mosquito-borne infection takes longer is unclear, and the mechanics and chemistry of mosquito bites are complicated.

“The biology of the disease probably depends a lot on how the mosquitoes transmit that disease — mechanically how they do it, and biologically what comes along with the virus when the mosquito bites,” says Tom Friedrich, a UW–Madison professor of pathobiological sciences.

Mosquitoes like Aedes aegypti, the primary Zika-carrying species of mosquito, make shallow jabs through human skin with their mouthparts until they break open tiny blood vessels. Then they eat.

“Each time it probes, it’s spitting into your skin,” says Aliota, whose work is funded by the National Institutes of Health. “Ideally for the mosquito, it’s going to find and rupture a capillary bed, and cause a hemorrhagic pool just under the skin. And that’s when it’s going to start ingesting blood and spitting saliva at the same time.”

The precise depth of the probing and the effect of the mosquito’s saliva — which keeps blood from coagulating and inhibits the immune response — are just a few likely factors separating a bite from any other method of Zika transmission.

The researchers found Zika spread nearly as wide in mosquito-infected monkeys as needle-infected animals, though the monkeys who had been bitten were less likely to have the virus invade central nervous system tissues like the eye or brain. Reproductive tract tissues — of particular interest given the virus’s most visible symptoms — were infected in both groups of animals.

“That reflects what we’re seeing epidemiologically in people — at least in infected adults — who don’t often have evidence of infection in their central nervous system and in their brain,” Aliota says.

The researchers brought uninfected mosquitoes back to feed on the monkeys when the animals were near the peak of their infections, but none of the macaques in the study developed an infection virulent enough to pass virus back to the biting mosquitoes.

“One thing we don’t understand about Zika virus is whether there’s an animal reservoir the virus can survive in, apart from the mosquitoes and humans we’re studying,” Dudley says. “These rhesus macaques did not seem to generate a high enough viral load to allow infection of a mosquito that could transmit it to another host, but that doesn’t mean other non-human primates couldn’t do that.”