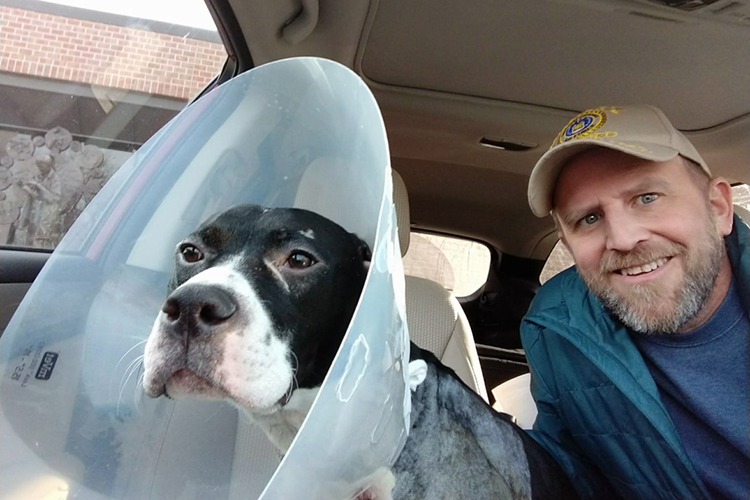 Shot and abandoned, Sarge is now healed and loved.

Sarge has come an incredibly long way since the frigid January morning when he was found abandoned on a rural roadside in Michigan’s Upper Peninsula, suffering from a broken left front leg and a gunshot wound to the head.

“He was barely stable at the time of intake,” recalls Sarah Erickson, manager of Northwoods Animal Shelter in Iron River, Michigan. “He was hypothermic because he had been shot in the very early morning hours and laid outside in the snow.”

From the good Samaritans who discovered and stayed with Sarge until help arrived, to the sheriff ’s deputy who shepherded him to emergency care, to the dedicated team at Northwoods that took the one-year-old pit bull mix under their wing for several months, Sarge’s plight launched a series of interventions that set him on a path to the loving adoptive home where he resides today.

Following initial treatment by Four Seasons Animal Hospital, also in Iron River, Sarge and Erickson made the more than four-hour drive to UW Veterinary Care for specialized surgery. A fracture to Sarge’s ulna (one of the two bones of the forearm) near the elbow required delicate repair, set with a bone plate and seven screws.

“It was difficult as it involved the elbow joint, so it was extremely important to anatomically reconstruct the pieces to prevent or minimize arthritis long-term,” explains Jason Bleedorn, a clinical associate professor of orthopedic surgery who led Sarge’s operation.

The team also removed the bullet that could have claimed Sarge’s life. X-rays revealed that the bullet entered Sarge’s skull near his right eye, tracked along the jaw, fractured parts of his neck vertebrae, then lodged near his shoulder. “The injuries from the bullet could have been much worse,” says Bleedorn. “He was very lucky.”

Sarge healed tremendously, all the while squirming with energy, tail everwagging, and offering kisses galore.

“From the minute the police picked him up, he was kissing their faces, wagging his tail, even though he must have been in excruciating pain,” Erickson told Michigan Live.

Sarge’s recovery has earned him widespread news coverage and community support, the moniker of “miracle mutt,” and a devoted social media following, with over $4,000 raised online for his medical expenses.

“What happened to him was absolutely awful, but I think it has ultimately turned out to be the best thing in his life,” Erickson says.

“Anytime someone brings in a dog rescued like this — traumatized and left on the side of the road — it is pretty amazing to help get him back to a full recovery,” adds Bleedorn, crediting Sarge’s strength and Northwoods’ dedication to his postoperative care. “He is a very tough and stoic dog and the shelter did an incredible job.”