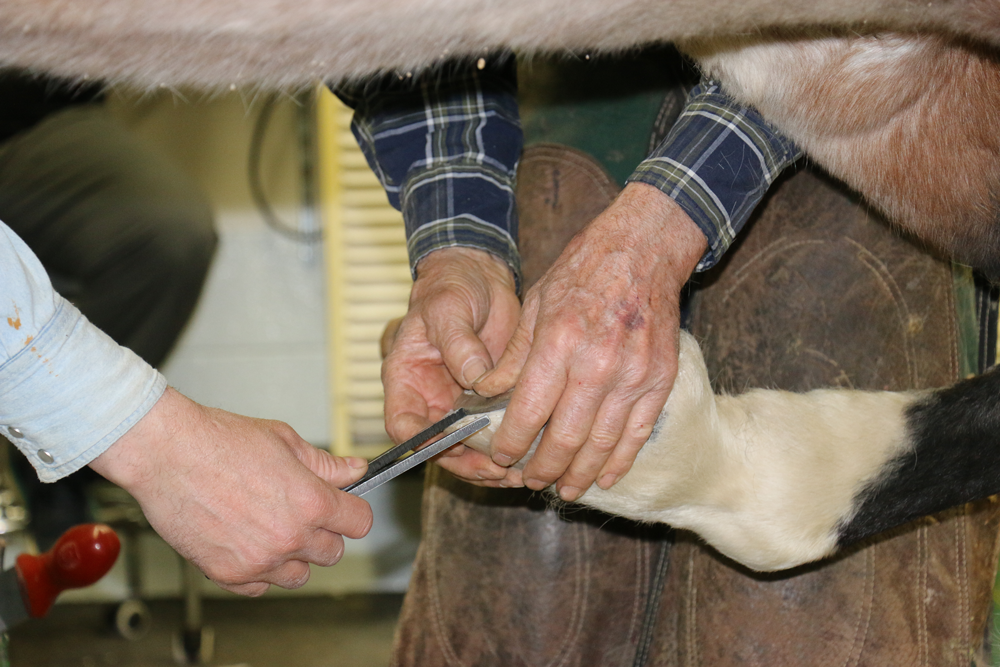 On Dean Johanningmeier’s first day as the farrier at the UW School of Veterinary Medicine’s large animal hospital in 1985, he remembers feeling a bit intimidated. But when it came time to talk equine lameness evaluations with staff and specialists, he felt right at home. He attributes this to his prior work with M.E. “Babe” Cullen, a third generation equine veterinarian, which prepared him to look beyond the hoof.

“The great thing about being part of a therapeutic team — listening to ideas and considering new approaches — is that we are not focused on finding what’s wrong,” says Johanningmeier. “We’re looking at the horse and asking each other what can be improved? What positive thing can we do for the horse? When we have a lame horse, it is a whole-horse problem.”

Being curious and methodical are at the core of Johanningmeier’s character, and they are qualities that led him to connect with two of the greatest minds in the farrier industry — Gene Ovnicek and Ric Redden. Ovnicek’s encyclopedic knowledge of methods and Redden’s thorough understanding of mechanics form the basis for how Johanningmeier works today.

However, Johanningmeier’s methods have evolved over the years out of necessity. “If I wouldn’t have changed, I wouldn’t be here,” he says. “New ideas for improvements came along, and my career grew with them. I hit walls and went through them.”

In 2011, Johanningmeier was recognized for his boundary-breaking work when he was inducted into the International Horseshoeing Hall of Fame. And he has continued adding to his extensive body of knowledge, acquiring certifications as an American Farrier’s Association (AFA) Journeyman Farrier, Natural Balance Farrier, and Natural Balance Barefoot Trimmer, and in Live Sole – Hoof Mapping.

As an independent contractor, Johanningmeier works closely with UW Veterinary Care’s team of equine surgeons, internists, radiologists, and residents. “To have Dean here is the most wonderful resource,” says Samantha Morello, clinical assistant professor of large animal surgery. “His base of knowledge is just so rich.”

He educates both students and staffers on the importance of proper foot care. Effective therapeutic equine footwear allows a horse’s heels and toes to rock, which reduces stress to the structures of the foot and promotes healing, according to Johanningmeier. As with running and hiking, special products now play an even bigger part in therapeutic farriery. “Now we use cushions and arch supports just like humans,” he says.

In 1998, Johanningmeier became a HoofTalk Certified Equine Natural Hoof Technician, a credential based on training in the natural shoeing methods of Lyle “Bergy” Bergeleen. Using this knowledge, his ongoing goal is to shift the mindset of owners and trainers toward giving restorative methods a chance to work. “Pain is really caused by a deeper, soft tissue injury, and every horse is going to take longer for inflammation to go away and become sound,” he says. “Muscle soreness is often a result of having to protect the soft tissue injury.”

Karen Anderson encountered this with her horse, JJ. “He literally couldn’t walk,” she says. “There was no light in his eyes. Every step was painful for him.”

Anderson, who travels to the UWVC Morrie Waud Large Animal Hospital for appointments from Glen Ellyn, Illinois, recalls watching as Johanningmeier went to work, putting clogs on JJ’s uneven feet — the result of an unfortunate shoeing incident. “He walked out sound,” says Anderson. “JJ had his personality back.”

From working with clients like Anderson, Johanningmeier understands deeply the humility of being with horses and their people. This awareness influences how he communicates across the spectrum of individuals involved with ongoing care. “You’ve got to educate the owner on the plan and the progress — giving recommendations and allowing the client to make the decisions,” he says. “I give options, and I get their permission to make changes because shoeing affects the overall well-being of the horse.”

Johanningmeier’s plans for his impending semi-retirement sound as full as most people’s working years. He’s looking forward to consulting with industry on farrier products and working with young farriers-in-training by traveling to their workshops and giving advice — a continuation of his life as a devoted mentor. “If it weren’t for Dean … I wouldn’t have made it this far,” says John Heral, a farrier from South Beloit who has been training with Johanningmeier since 2011. “What I see in one day with him would have taken me five years to learn out in the field.”

This article appears in the summer 2017 issue of On Call magazine.