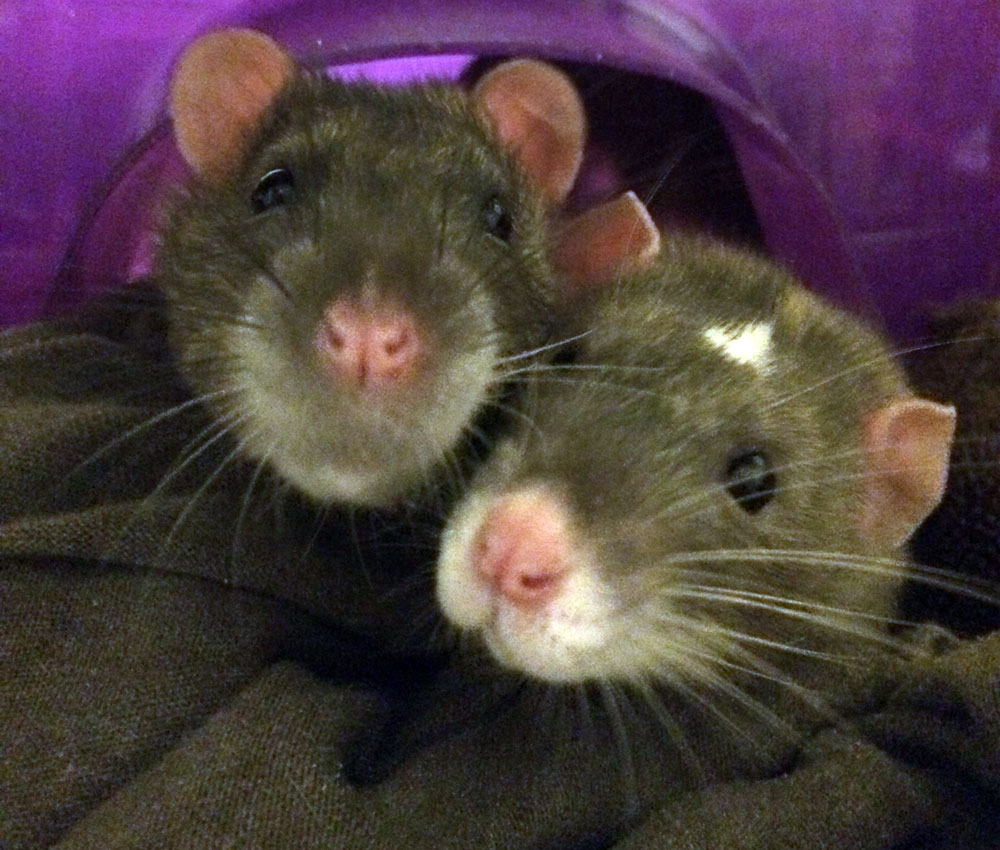 When veterinary medicine students sit at the active learning workspaces bearing the names Louie, Sammie, Reggie, Lucky, Bonzo, and Willie, they may not realize they’re helping to memorialize cherished rats.

The two pairs of three rodent brothers found their way into the heart and home of Christine Hayward after she went searching for a quiet companion who met her apartment’s pet regulations. A first-time rat parent when she adopted Lucky, Bonzo, and Willie from Dane County Humane Society, Hayward quickly fell in love with the species.

“I brought them home and I thought, I just got three rats, am I nuts?” Hayward recalls. “But they became the sweetest guys. They are very smart and very loving.”

Hayward enjoyed several years with the first trio before their passing, then adopted a second set of brothers, Louie, Sammie, and Reggie. She can rattle off instances of the rats’ silly antics, from teaching them how to walk on two feet and spin, to feeding their affinity for peas, noodles, and ice cream.

There were tender moments as well. Hayward remembers one evening when she wasn’t feeling well and Louie was also ailing, when Reggie seemed to take on the role of caregiver. “I was lying in bed and Reggie would come in almost to the dot every 15 minutes to sniff me and wait until I acknowledged him, go back to Louie and play with him, then come back to me and then play with Louie,” Hayward says. “I thought, a rat is making sure the two of us are okay — this is crazy.”

Several of Hayward’s rats were patients of UW Veterinary Care, where she says positive experiences inspired her to support the School of Veterinary Medicine and hospital. Hayward was especially touched by the compassionate approach of Anna Martel DVM’15, then a resident in zoological companion animal medicine, who established immediate rapport with the typically shy rats.

“You can tell when someone genuinely loves animals and she clearly did,” Hayward says. “The time that she took with them and how much they bonded with her and so quickly, it was just amazing.”

When Sammie became ill and passed away suddenly, Hayward says Martel called her immediately to express sympathy. “Sammie wasn’t even one of the rats she was treating. That shows how compassionate your team is.”

To help train tomorrow’s veterinarians, Hayward named two pods in the school’s active learning classroom, where small groups of students work through patient case studies using a team-based approach. She also recently documented an estate gift to support the greatest needs of the school and Special Species service. At 33, Hayward may not be among the typical demographic planning her estate, but she says it feels good to be able to give when she’s younger and see her gifts at work, while also considering her long-term impact.

“To me it’s important that animals are helped in the best way possible and I think a wonderful way to do that is to give both in my living years, which I hope go on for a long time, but in my legacy as well, so that amazing, compassionate vets can come out of your program and continue to help all different types of animals,” she says.

This article appeared in the winter 2019-20 issue of On Call magazine.