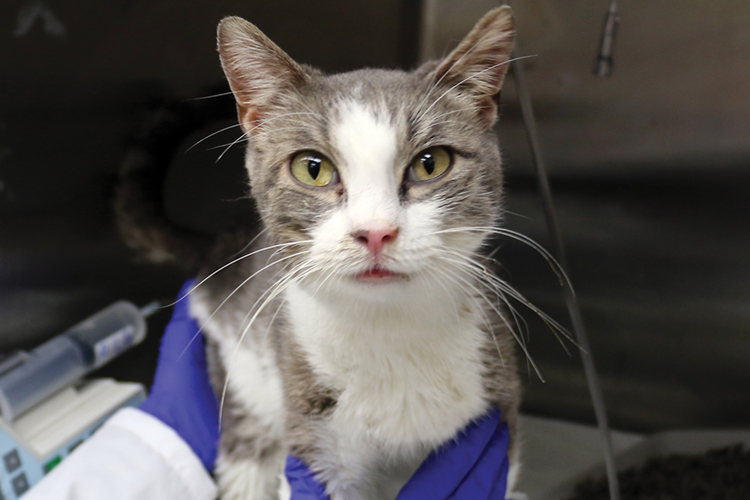 In the moments after handing Janet McGowan a parking pass to place in her car, UW Veterinary Care (UWVC) reception staff member Julie Cotton sensed that something was seriously wrong with McGowan’s cat, Molly, who waited in a carrier atop the hospital’s reception desk.

The cat was struggling to breathe so Cotton acted quickly, hurrying her to the hospital’s Critical Care unit. Cotton’s instincts were correct, and may have saved Molly’s life.

“She was open-mouth breathing, which in cats we treat as an immediate emergency,” says small animal internal medicine resident Casandra Jacobs, who helped to treat two-year-old Molly.

When McGowan returned from the parking lot, Jacobs and Marcella Granfone, a resident in Emergency and Critical Care, had already begun delivering oxygen to Molly and were working to diagnose her situation. Just a few minutes later, it was discovered that a large polyp above the soft palette was restricting the cat’s upper airway and causing ulcerations in her mouth. A team was readied to remove the obstruction and anesthesia staff were standing by.

Jacobs briefed McGowan on Molly’s condition and a brief surgical procedure was set in motion.

“It was phenomenal teamwork, from the front desk recognizing it to quick triage in the hospital,” adds Jacobs. “Everyone dropped what they were doing and came to help this cat. We were really worried about her.”

A pink, oval-shaped polyp was plucked from Molly’s nasopharynx region (in the upper part of the throat, behind the nasal passages). Benign or noncancerous masses of tissue, polyps are common in cats that experience upper airway inflammation, which Molly had a history of, but they typically grow to one to two centimeters. Molly’s polyp was more than three centimeters in length.

“We’d never seen one this big,” says Jacobs. “I was shocked.”

The size is even more significant considering Molly’s small stature. The runt of her litter (McGowan rescued Molly and three siblings from a corn granary as kittens), Molly weighs less than two kilograms, or about three and a half pounds.

Following the procedure, it took a while for Molly to adjust to unobstructed breathing. Whereas in normal breathing an accumulation of carbon dioxide in the blood signals the lungs to exhale and inhale, because Molly had been deprived of oxygen for so long due to the obstruction, a low oxygen level had come to drive her breathing. “She had to relearn how to breathe,” explains Jacobs.

Molly was also ravenous after the surgery, chowing down on several bowls of food. In the weeks prior, McGowan says, Molly would choke when she tried to eat, one of the symptoms that originally spurred her referral appointment at UW Veterinary Care. Molly’s primary care clinician at Ashton Animal Clinic in Ashton, Illinois, referred her to UWVC for an endoscopic examination.

“She was so sick she couldn’t eat,” says McGowan. “I had been preparing for the worst.”

Molly stayed one night in the hospital after her surgery, then she and McGowan were back on the road, with both now breathing easier.

“I felt really good about coming up here,” says McGowan. “You don’t know how impressed I am.”