Some people have a way of perceiving that enables them to see what is missing — to understand what is needed to make things even better. That’s surely the case with Mary and Jeffrey Brown’s care of their horse Newman and their gift of a hay steamer to the Morrie Waud Large Animal Hospital.

The Browns bring Newman from Milwaukee to be treated by UW School of Veterinary Medicine faculty because of the team’s combined expertise in equine care. As an equestrian for over 25 years, Mary has come to value the resource even more.

“As a teaching hospital, it’s a very special place,” she says. “I’m so grateful to have such a hospital in our area.”

Last winter, Newman, their 9-year-old Canadian Sport Horse, began experiencing digestive upset. “Show horses are under a lot of stress and 2019 was a weird summer with low-quality hay — too much rain and mold. It was very hard to find good hay,” recalls Mary.

Mary had read about hay steamers and asked her veterinarian if using one would be a good idea to support Newman’s health. Yes was the answer because of a steamer’s ability to reduce bacteria, mold, and other allergens or irritants in hay, so Mary bought one for Newman. “Whatever Newman needs,” quips Jeffrey. “Anything you can do to help relieve problems in their gut is well worth it.” 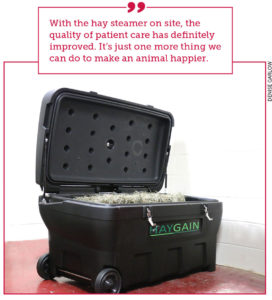 In May, Newman had two episodes of colic (abdominal pain in horses that can range from mild to severe, sometimes even requiring surgery) within 10 days. These recurring episodes led to Newman being admitted to UW Veterinary Care for a four-day stay. During this period of medical care, Mary’s idea of a gift to the school began taking shape.

Knowing how Newman benefited from his steamed hay regimen, she asked large animal surgery intern Kristi Bowers if the school had a hay steamer and learned they did not. Clinicians put her in touch with Pat Bowdish, the school’s managing senior director of development. “The process was very easy. Pat helped facilitate and the staff researched the purchase,” says Mary. By summer, a new full-bale Haygain hay steamer was installed at the hospital.

The hay steamer has been put to use for a wide variety of conditions and species at UW Veterinary Care — some surprising.

“I use the hay steamer on asthmatic equine patients because it reduces particles and mold,” says Alex Powers, a third-year internal medicine resident who helped research and select the Haygain steamer.

The steamer also makes hay more palatable for finicky patients. “We see a lot of very sick animals who refuse any type of feed, who have a poor appetite because they are not feeling well,” she explains. “When the hay is steamed for an hour it becomes quite aromatic. So often, the steamed hay is the only thing we can get them to eat. We use it for horses, cattle, sheep, even goats.”

In addition, the steamer increases the water content of hay — beneficial for equine patients with colic and digestive disorders who don’t like drinking water routinely, according to Powers.

“With the hay steamer on site, the quality of patient care has definitely improved,” she says. “It’s just one more thing we can do to make an animal happier.”