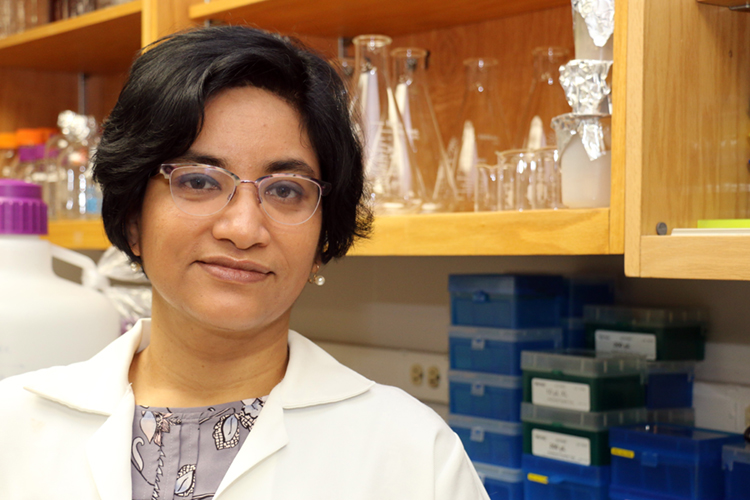 Jayshree Samanta, assistant professor of neuroscience in the Department of Comparative Biosciences at the UW School of Veterinary Medicine.

What attracted you to UW–Madison and the School of Veterinary Medicine?

I was impressed with the collegiality of the faculty members in my department, the beautiful lakeshore, and the creative license plates in Madison.

How did you get into your field of research?

I wanted to be a neurologist, but during the course of my studies in medical school, I realized that most neurological diseases are medical mysteries and incurable. This kindled my interest in neuroscience research.

In my postdoctoral work at New York University (NYU), I identified Gli1 as a therapeutic drug target for enhancing remyelination by neural stem cells. My lab is continuing this research to explore the mechanisms involved in myelination by neural stem cells in the healthy and diseased brain. My research may lead to the discovery of therapeutic targets for treatment of multiple sclerosis and other myelin disorders.

What is Gli1 and what does it mean for it to be a therapeutic drug target?

Gli1 is a transcription factor expressed by a subset of stem cells residing in the brain. As a therapeutic target, we can use drugs to block Gli1’s function, which will increase remyelination and repair of myelin in the brain.

How are neural stem cells used to repair myelin and how could this be applied clinically?

My research may lead to the discovery of therapeutic targets for treatment of multiple sclerosis and other myelin disorders.”

Along with my co-mentors at NYU, I have a patent for using inhibition of Gli1 as a strategy for enhancing remyelination. NYU is now helping to translate this strategy into therapy for multiple sclerosis by identifying small molecules that specifically inhibit Gli1 and can be developed into drugs in the near future.

With your background in human medicine, what is it like to now work at a school of veterinary medicine? Are there benefits to having colleagues who study both animal and human medicine?

I am very fortunate to have the opportunity to work with colleagues in both human and animal health. My training in human medicine taught me about the pathophysiology and clinical aspects of the human diseases I am studying in my lab. Since I am using animal models to study these diseases, my interaction with veterinarians has helped me  understand and interpret my findings at a greater depth. For example, I am collaborating with a veterinary radiologist for MRI imaging of one of the animal models of demyelination.

In addition, my colleagues at the School of Veterinary Medicine have introduced me to several different animals that can suffer from demyelinating diseases just like
humans, such as dogs, cats, and hedgehogs.

What would you say to someone who is surprised to learn that a researcher such as yourself, studying important diseases affecting people, is based within a school of veterinary medicine?

I think lay people are still not familiar with the idea of One Health [forging connections and collaborations across the health of humans, animals, and the environment] and we as a scientific community have to do a better job of informing them about the benefits of animal research. Surprisingly, I have had to explain why I work in the vet school to colleagues in the School of Medicine. I think the concept of One Health is somewhat alien to even the educated medical research community.

What’s something interesting about your area of expertise that will make us sound smarter?

Myelin makes our nerves conduct impulses at least 100-fold faster. The highest velocity in a myelinated neuron is about 150 meters per second.