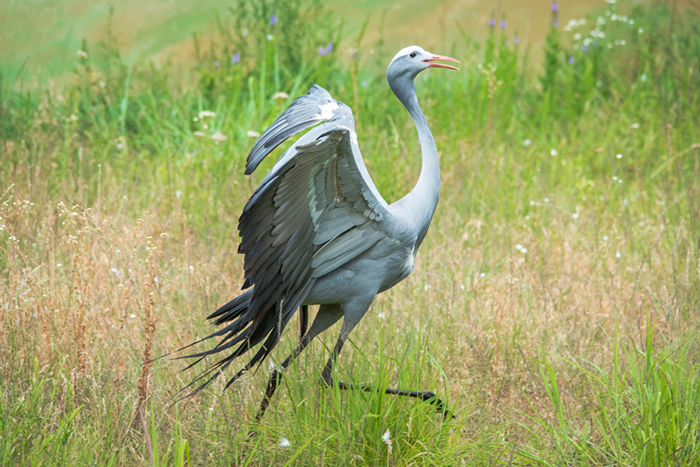 This story is republished with permission from the International Crane Foundation. View the original story

Periwinkle, a 7-year-old female Blue Crane, received a life-saving surgery at UW Veterinary Care, the teaching hospital at the University of Wisconsin School of Veterinary Medicine (SVM) earlier this year. In May, International Crane Foundation aviculturists found Periwinkle in respiratory distress while choking on a pebble from her enclosure.

Barry Hartup DVM’93, the foundation’s Director of Conservation Medicine and Clinical Instructor of Zoological Medicine at the SVM, performed a tracheostomy and successfully removed the pebble from the airway so Periwinkle could breathe. Though Periwinkle healed outwardly from the surgery, her respiratory distress returned after six weeks in early July.

Due to suspicion of a tracheal stenosis, a narrowing of the airway and common complication in birds after a tracheostomy, and the complexity of a crane’s respiratory system (cranes have a uniquely coiled trachea within their sternum), Periwinkle was transported to the SVM for further evaluation. With the assistance of Clinical Instructor Grayson Doss and zoological medicine resident Taylor Yaw, as well as specialists in anesthesia, a CT scan was performed, revealing a large mass within Periwinkle’s trachea at the base of her neck. An endoscopic camera was inserted into Periwinkle’s airway to visualize the area of concern. Abundant scar tissue at the previous surgical site was impeding her airway.

The veterinary team determined that this portion of the trachea needed to be removed or she would be unlikely to survive much longer. Sara Colopy DVM’04, PhD’12, clinical instructor of small animal surgery at the SVM, joined a team of experienced technicians who prepared Periwinkle for surgery. Since the surgery involved the trachea, the anesthesia team placed her breathing tube into one of her abdominal air sacs, a respiratory structure unique to birds, to be able to breathe for her throughout the two-hour surgery.

Dr. Colopy was able to successfully isolate the area of the trachea that was of concern, remove it, and reattach the two healthy, unobstructed ends. This is the first reported case of a blue crane successfully receiving a tracheal resection and anastomosis, or reconnection, procedure.

Within the first few hours after surgery, Periwinkle recovered well, was driven the hour back to the International Crane Foundation, and reunited with her mate, Kito, in her enclosure.

The veterinary team has been closely monitoring Periwinkle’s progression. So far, she appears to be doing well. She can be observed daily using her surgically repaired trachea to make various calls with Kito while on public display. Learn more about Blue Cranes