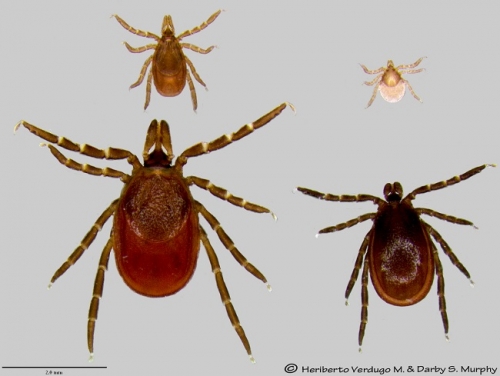 Between 2004 and 2016, the number of people who acquired diseases from mosquitoes, ticks and flea bites tripled in the United States. These include diseases like Lyme disease, West Nile virus and dengue fever. Nine new diseases spread by mosquitoes and ticks, including Zika virus, were discovered or appeared here during that time.

These statistics were issued May 1, 2018, in a new report from the U.S. Centers for Disease Control and Prevention (CDC) in an effort to bring attention to the threat these diseases present to people across the country. The agency also reported that, as a nation, we are ill-prepared to address these challenges. Fewer than 20 percent of state and local organizations are equipped to adequately address prevention and spread of diseases by mosquitoes, ticks and other insect vectors.

The CDC-funded Midwest Center of Excellence for Vector Borne Disease, led by UW–Madison medical entomologists Susan Paskewitz, a professor in the College of Agricultural and Life Sciences, and Lyric Bartholomay, a professor in the School of Veterinary Medicine and the Global Health Institute, is one of five consortia funded by the CDC to combat infectious diseases transmitted by ticks and mosquitoes. The Midwest center pulls together expertise from across Wisconsin, Illinois, Iowa, Michigan and Minnesota.

“We are working together with universities, public health agencies, and mosquito control districts across a five-state region to improve public health associated with vector-borne disease,” says Paskewitz. “These groups combine expertise to train the next generation, identify and validate innovative control methods, provide a stronger evidence base for currently available pest management tactics, and respond quickly to emergent issues.”

She further explains that the task is to respond to: the invasion of exotic diseases and new vectors; periodic and epidemic emergences of known viruses, like West Nile; and the increase and expansion of tick-borne illnesses, like Lyme Disease.

Wisconsin is, in fact, a hotspot for Lyme Disease and other tick-borne pathogens, ranking in the top 20 percent of Lyme Disease cases in the U.S., according to the new CDC report. More than 33,000 cases of Lyme Disease were reported in the state between 2004 and 2016, and the number of actual cases (unreported) is likely to be higher.

The CDC report found that while the U.S. overall is not yet doing enough to address control of mosquitoes and ticks, or to protect Americans from the diseases they carry, the agency also remains optimistic. In a call it hosted with reporters and public health experts across the country on May 1, CDC Director Robert Redfield called local agencies the “first line of defense” and called for greater investment in their ability to control and prevent vector-borne illness.

To do so, the agency recommends:

This is indeed what the Midwest Center of Excellence is focused on achieving across the upper Midwest. “We are tackling the growing threat of vector-borne disease by finding new ways to control ticks in backyards, by expanding the ways that we look for vectors and diseases they transmit, by critically testing methods for mosquito control, and by training students to be able to collect, recognize and control mosquitoes and ticks,” says Bartholomay.

Continuing to fund the Midwest Center of Excellence promises to advance progress when it comes to improving the ability to prevent and respond to diseases.

“The Centers of Excellence are a new strategy for organizing and enhancing efforts from the national to local level,” says Paskewitz. “However, boom and bust cycles of funding have hindered our ability to respond to emerging and persistent vector-borne disease. We geared up when West Nile Virus came along, and then lost that expertise by the time Zika entered the scene. We know dengue and chikungunya, as well as new tick-borne infections, will occur and we must retain readiness.”