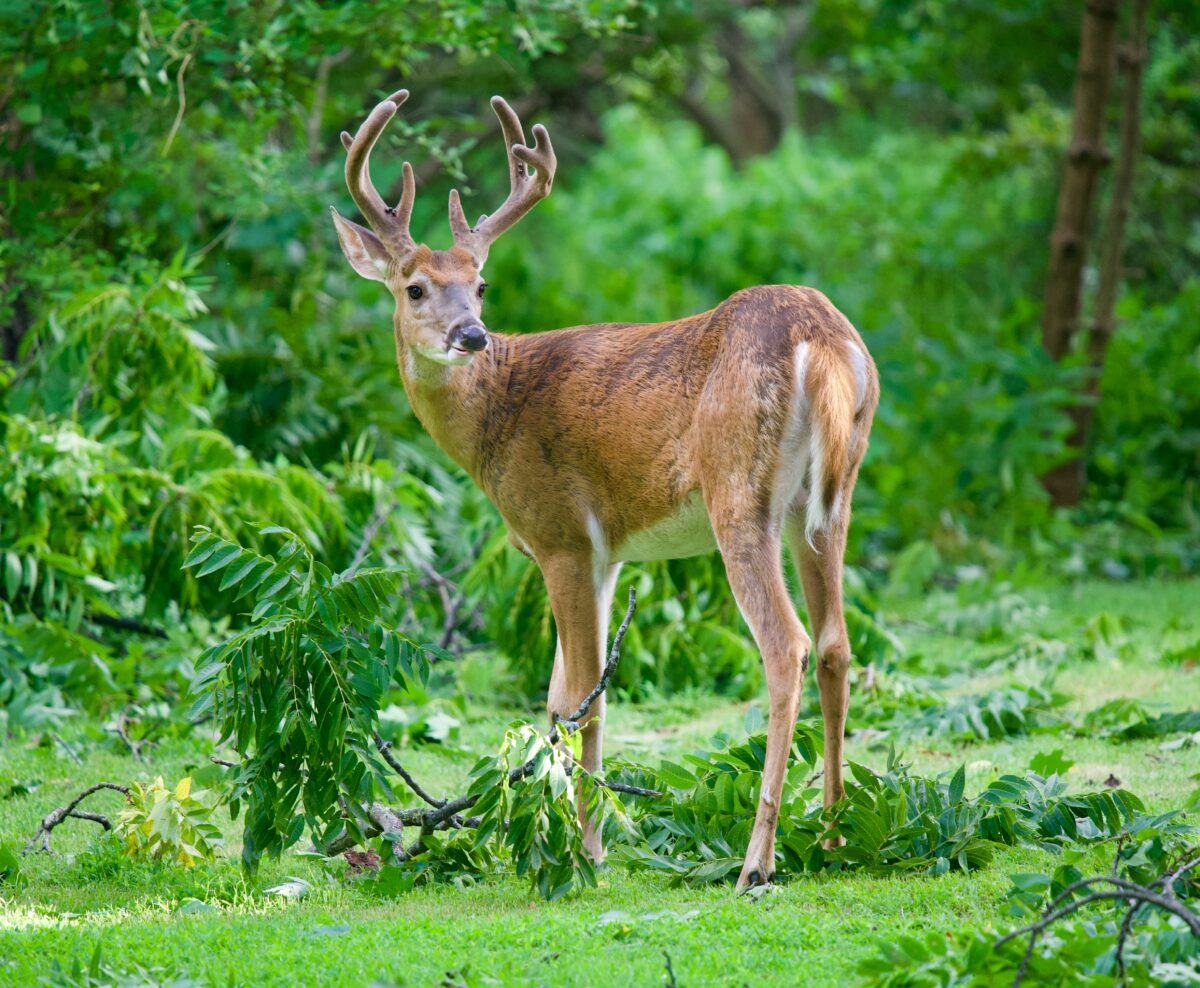 Together, researchers at the UW School of Veterinary Medicine and Wisconsin Department of Natural Resources (DNR) are working to uncover new insights into chronic wasting disease (CWD) in white-tailed deer populations. Building on decades of collaboration between the two units, the partnership has proven vital to the study’s success.

Marie Pinkerton, a clinical professor of anatomic pathology at the School of Veterinary Medicine, provides necropsy (autopsy) services for the research project, which began in 2017 and is in its fifth year of data collection.

To start, wildlife scientists and field crew trappers humanely caught and attached GPS collars to a sample population of deer in Southwestern Wisconsin — the region of the state where CWD is most prevalent.

From there, electronic signals track the animals’ fates. When an animal stops moving, the research team recovers the animal. Their goal is to gain insight into how CWD affects deer populations and eventually build a singular model of data to provide a standard basis for CWD research that doesn’t currently exist.

The project is the largest study the DNR has ever undertaken.

Since CWD was found in Wisconsin in 2002, it has impacted both wild and captive deer. Stakeholders are working to address and control the disease through a multi-pronged response plan, including research and testing. Of 266,528 wild deer sampled across Wisconsin since 2002 (most of these collected during hunting season), 8,242 have been positive for CWD.

CWD is an infectious prion disease of the deer family. Variant prions, which cause CWD, are proteins that aggregate around normal prion proteins in the body, ultimately changing their shape and causing abnormal cellular reactions. Though the disease is mostly found in the neural tissue of the brain, it can migrate anywhere in an animal’s body.

“Those aggregations build up in the body, in the brain, and cause all sorts of cascading consequences,” says Daniel Storm, a deer research scientist for the DNR and the project’s lead researcher. “It causes a cascade of diseases or ailments and eventually kills the deer. It’s invariably fatal. No recovery, no cure.”

Risk Unknown
According to the U.S. Centers for Disease Control and Prevention, there have been no reported cases of CWD infection in people.

Some animal studies suggest CWD poses a risk to certain types of non-human primates, like monkeys, that eat meat or come in contact with fluids from CWD-infected animals. These studies raise concerns that there may also be a risk to people. Since 1997, the World Health Organization has recommended keeping the agents of all known prion diseases from entering the human food chain.

Hunters anywhere in Wisconsin can submit a sample from their deer for CWD testing. Testing through the DNR is free for deer harvested in Wisconsin. For more information, visit dnr.wisconsin.gov.

He emphasized the disease’s infectious nature. Animals spread it through saliva, urine, feces, and other channels.

Pinkerton had previously expressed her interest in wildlife research to Storm and other DNR colleagues, so when Storm reached out with an invitation to help with this study, she readily accepted.

When deceased animals are collected, the DNR sends them to Pinkerton for a necropsy to determine the exact cause of death. Her extensive knowledge of pathology and necropsy techniques has made her invaluable to the research team and finding answers to Storm’s pressing questions.

“She’s got a ton of expertise that we don’t have. She’s someone that spends her whole career teaching and doing animal pathology work,” Storm explains. “That’s why we’re so lucky to have Marie and the vet school. She’s a very willing and eager partner. So it’s been really, really awesome for us because it’s given us a wealth of information that we wouldn’t have gotten otherwise.”

Though the study is still in progress (it will wind down in 2022), both Storm and Pinkerton have noticed patterns in the data collected so far. “One of the first trends we established is that deer that are CWD positive are 30 percent or so more likely to die,” Pinkerton says. “Which sounds like something that you would say, ‘Yes, that’s an obvious thing.’ But it’s nice to also have the numbers to be able to prove that.”

Veterinary residents pursuing advanced training in pathology at the school have also become involved in the process. They’ve been able to execute the Wisconsin Idea firsthand, utilizing their expertise in service to the state while gaining broader knowledge. “It’s certainly been an eye-opening teaching experience for them, as far as what wildlife pathology entails,” Pinkerton says.

“She’s got a ton of expertise that we don’t have. She’s someone that spends her whole career teaching and doing animal pathology work. That’s why we’re so lucky to have Marie and the vet school. It’s been really, really awesome for us because it’s given us a wealth of information that we wouldn’t have gotten otherwise.”

These types of partnerships have proven invaluable, whether working to slow the spread of CWD or confront emerging threats that could impact the state’s deer and other wildlife. Most recently, this fall, the DNR confirmed cases of epizootic hemorrhagic disease, or EHD, in deer in Juneau and La Crosse counties. While the agency doesn’t believe the disease poses a significant threat, they have encouraged the public to remain vigilant and report to the DNR any sick or unusual deer sightings or deaths.

Additionally, in light of recent research that found that hundreds of white-tailed deer tested in Iowa have been infected with the coronavirus, School of Veterinary Medicine professor Tony Goldberg is involved with stakeholders in Wisconsin and beyond about next steps. He has also spoken with multiple media outlets about the implications of deer as potential transmission reservoirs, particularly amidst fall deer hunting seasons. Experts hope the findings encourage the creation of more effective pathogen surveillance systems.

For now, researchers continue to uncover a better understanding of Wisconsin’s deer populations while keeping an eye on what’s next.