It is much more likely for a Labrador Retriever to experience anterior cruciate ligament rupture than Greyhounds. While both breeds are Canis lupus familiaris, different dog breeds have different predispositions to disease, and this may be key to understanding and treating similar diseases in humans.

A Byproduct of Domestication 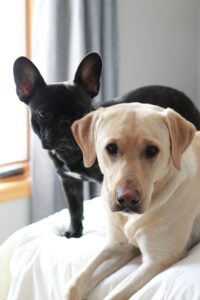 Around 10,000 years ago, the relationship between wolves and humans began to change. From foe to friend, domestication made way for village dogs, which lived among human communities. As the relationship between humans and dogs evolved, increasing selective pressures were applied, and these resulted in phenotypic change, particularly with respect to appearance and behavior.

In recent centuries, intense selective breeding pressure over a short period of time has created many different phenotypes and the 400 plus dog breeds of varying morphology we know today. However, undesired genetic variants were also inadvertently enriched in specific breeds, which has made different breeds more protected or more vulnerable to specific diseases.

His lab uses a variety of genomic approaches, such as genome-wide association studies, transcriptomics and whole-genome sequencing analysis to identify genetic causes of disease in companion animals. Through analyzing diseases such as anterior cruciate ligament rupture, laryngeal paralysis and fibrotic myopathy, he aims to discover novel genetic contributions to disease and develop genetic tests for these conditions in dogs that will improve veterinary care for these patients.

phenotypic: relating to the set of observable characteristics of an animal or other organisms resulting from interaction of its genome with the environment

morphology: the study and categorization of the form and shape of an organism

transcriptomic: a method that allows for the study of the complete set of RNA genetic sequences

Mendelian: a term to describe common patterns of inheritance

pleiotropy: a phenomenon in which a single gene influences multiple distinct traits through genetic variant sharing

genetic variant: permanent change in the DNA sequence that makes up a gene

“In the world of veterinary medicine there is a lot of interest in developing tests to genotype dogs to see if they carry certain mutations,” explains Muir. This information can be useful not only to breeders so they can avoid carriers or individuals with high genetic risk when breeding, but also to the dog-owning public, as dogs identified as high risk for certain genetic diseases can get personalized care or preemptive treatment.

However, studying these diseases in dogs may also be key to treating humans; for example, in the case of Mendelian diseases. These diseases occur when specific mutations of genes are passed down to next generations. Well-known examples include cystic fibrosis and sickle cell disease.

“Mendelian disease, like Duchenne muscular dystrophy, affects both humans and dogs. The mutation causing this disease is present in the same gene in both species,” illustrates Muir. “The mutation is not the same, but humans and dogs develop a similar disease, so the idea that the disease in dogs works as a model for the other is not difficult to grasp.”

Laryngeal paralysis and fibrotic myopathy are also similar to related diseases in humans. The discovery of a novel genetic effect in dogs could help human genomic researchers to advance work in that area to make more discoveries in the human equivalent disease.

“If there is a genetic disease that has a phenotype and a drug company is interested in a disease-modifying treatment, confirming its efficacy is much easier and less costly in a dog model than conducting human trials,” elaborates Muir. “And these studies also provide benefits for dogs.”

As opposed to research with model organisms where animals are kept in the lab, companion animal research depends on the community of dog owners who help conduct their studies.

“On this campus, people know where the vet school building is, but they don’t always know there is a small animal hospital there with more than 25,000 patient admissions a year, and that this is a valuable resource for scientific investigation” explains Muir.

Dog, cat and horse owners interested in getting involved should check their Facebook page, where the lab makes posts detailing what pets they may be recruiting for their research.

Reprinted with permission of the Center for Genomic Science Innovation.