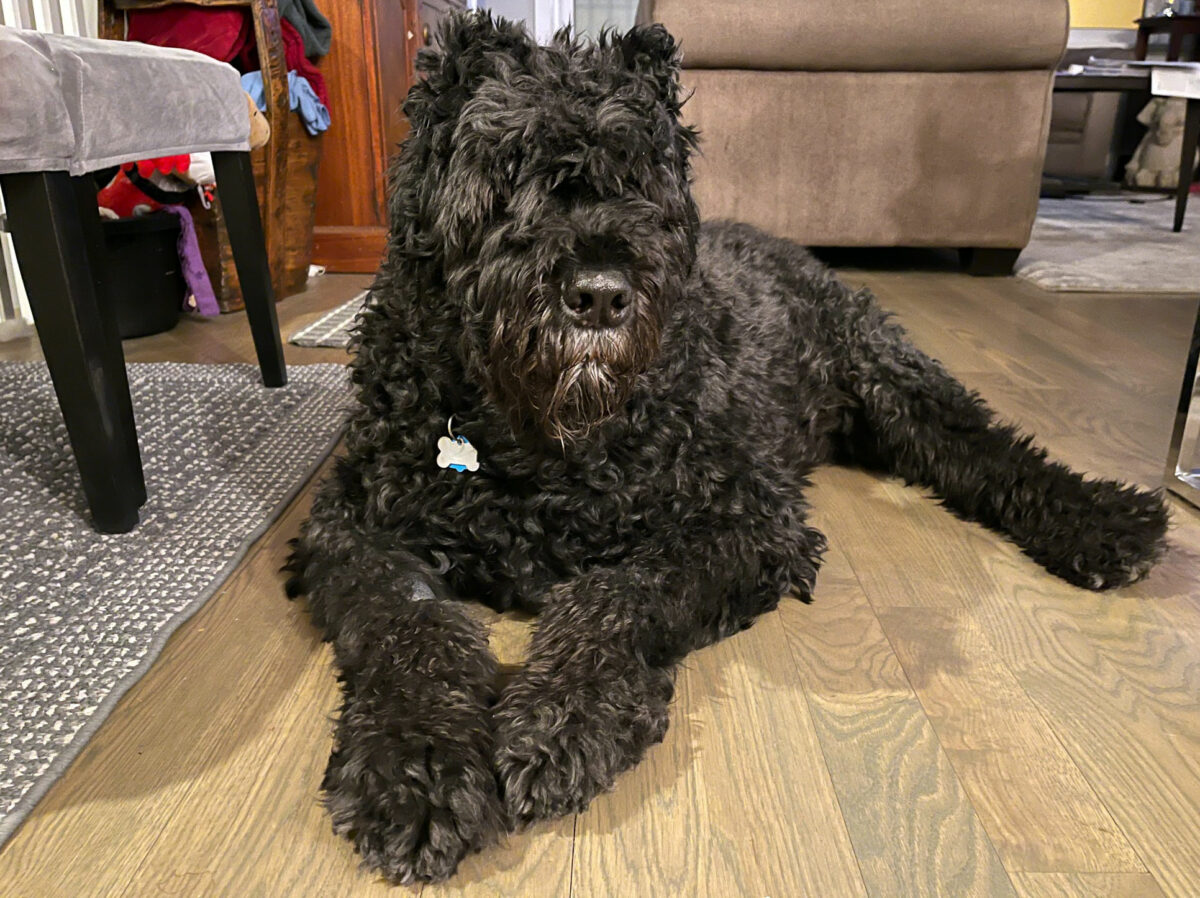 Michelle* swears she will never forget Feb. 19, 2021. It was her birthday, so she decided to take the day off to take Buster, the family’s Bouvier de Flandres, to their veterinarian for a check-up. She had noticed a small amount of blood drip from his nose and felt worried.

The veterinarian, a friend of Michelle’s, eased her anxiety. Still, he asked to see Buster again the following week for a teeth cleaning and minor imaging. It was at that next appointment that he confirmed and broke the news about the tumors on Buster’s spleen. He hadn’t wanted to ruin Michelle’s birthday.

“He said, ‘There’s a mass on his spleen that needs to come out,’” Michelle recalls. “Buster had a splenectomy and he did really well with that. But about a week or so later, we got the worst news ever. It was a hemangiosarcoma.”

Hemangiosarcoma is a rapidly growing and highly invasive cancer. It occurs mostly in dogs, especially in certain breeds like German Shepherds and Golden Retrievers. The tumors often appear on the spleen, as they did for Buster.

Michelle and her family were devastated when the diagnosis gave him only a few weeks to months to live. He’d been adopted 11 years prior, growing up side-by-side with Michelle’s daughter.

“We have four alphas in the family and he is absolutely one of them,” she says, laughing. “But he is gentle as can be. It was funny because he used to give our daughter a hard time when she was quite little… They’ve grown up like siblings because she’s an only child.”

Buster’s primary veterinarian began chemotherapy, but Michelle was desperate to get him to an oncologist to confirm she was doing everything possible to provide him with specialized care. She searched for an appointment to no avail. Eventually, they secured an appointment at a veterinary oncology practice in Chicago, where Buster underwent multiple rounds of chemotherapy.

He appeared to be doing well, but they ran into another challenge when it was discovered that a tumor was causing Buster difficulty breathing. His veterinarian suggested they visit UW-Madison’s School of Veterinary Medicine, and the connection led Buster and Michelle to Wisconsin.

There, Buster visited with the hospital’s cancer care specialists. Because Buster had also developed a nasal tumor, he received radiation therapy. The treatments lasted two weeks, so Buster quickly got to know the UW Veterinary Care team.

“Buster doesn’t even really like going in the car because he’s a big, giant dog,” Michelle says. “But when he knew we were going up to UW, he was happy as can be. He’d hop right in the car.”

Karanbir Randhawa, a second-year resident with UW Veterinary Care’s Radiation Oncology service, notes that Buster remained happy and aloof despite the intensity of the treatment.

“He would get treated and then sleep the rest of the day,” Randhawa says. “He was just like a massive, cuddly giant.”

“The Petco funds were able to help offset some of the cost of radiation. So I was just profoundly grateful. He’s lived ten months and apparently that’s completely unheard of. He’s kind of a miracle dog.”

Michelle began to worry about the costs of treatment, however. “I would have done anything to get him the help he needed,” she says.

She was relieved to learn of the Petco Love and Blue Buffalo Pet Cancer Treatment Fund, which seeks to support pet parents unable to afford treating pets diagnosed with cancer. In October 2020, the UW School of Veterinary Medicine was awarded a $75,000 grant from Petco Love for pet cancer treatment funds, distributed to clients on a first-come, first-served basis. Since 2016, the foundation has invested about $16 million to fight pet cancer, with thousands of those dollars going toward Buster, whose scans eventually came back clean.

“The Petco funds were able to help offset some of the cost of radiation. So I was just profoundly grateful,” Michelle says. “He’s lived ten months and apparently that’s completely unheard of. He’s kind of a miracle dog.”

“Every night we go for our walks and we do our 10 gratitudes. I have to translate for him sometimes,” Michelle adds happily. “But we both are grateful for different things. And, of course every night, the first thing I’m grateful for is that he’s out walking with me.”

*Client prefers to be referenced by first name.