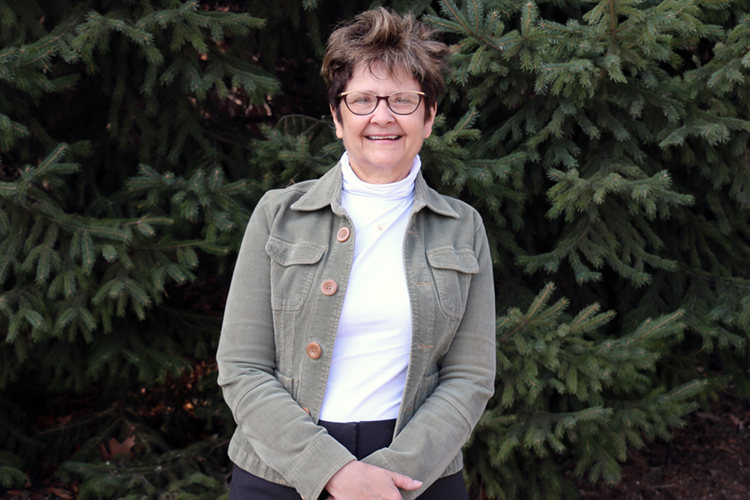 First a doctor to animals, Larsen now develops medicines for them

The mind can go in many directions while washing dishes. For Diane Larsen, it led to her role today, heading drug development for the global pharmaceutical company Boehringer Ingelheim.

Looking “to get some extra cash” as a UW School of Veterinary Medicine (SVM) student, Larsen began washing dishes in the lab of virologist Virginia Hinshaw, who was then at UW–Madison studying avian influenza. The job quickly became much more than a source of spending money.

“I didn’t know how interested I would be until I got into the lab,” Larsen recalls. “As I got more involved, Virginia started giving me projects that were more related to the science. I became very, very interested in research.”

The spark that was ignited in that lab has continued to burn throughout
Larsen’s career, outlined below.

For 17 years, Larsen has worked at the global animal health company Merial, which in 2017 was acquired by Boehringer Ingelheim.

The company is focused on disease prevention and health management, producing a number of therapeutic drugs, parasite-control products, and vaccines.

Five project leaders report to Larsen, managing all technical deliverables for new pharmaceuticals from the late research stage to launch.

Once there is proof of concept (when it’s been demonstrated that a particular molecule is showing promising results), project leaders step in.

They gather collaborative, cross-functional teams that can include formulators, clinicians, manufacturers, engineers, marketers, and regulatory staff. “You don’t have direct authority to any of these people, so you have to finesse them into wanting to deliver, and to deliver on time,” she says.

I had no idea I would be interested in industry. I started vet school with the idea I was going to be a practitioner, period. But then you get exposed to other things.”

Together, these teams determine the final drug formulation and dose, demonstrate safety and efficacy, ensure that the product can be scaled up to production at a commercial level, anticipate potential regulatory hurdles, and more.

Larsen could spend days describing the details of this work, “which is what makes it so
exciting for me. It’s such a nice mix of basic science, veterinary medicine, marketing, and manufacturing.”

NexGard, a chewable flea and tick control product, is one that Larsen oversaw the production of, as well as NexGard Spectra, a similar product available in the European Union.

Creating a chewable NexGard formulation that’s highly palatable for dogs but doesn’t contain any meat, with food industry equipment and ingredients, presented challenges. “You’re trying to take a food product and make it fit into the restrictions for a regulatory pharmaceutical product.”

There were tense moments along the way. “People were not afraid to come to me and say ‘We’ve got a real challenge here and we’re not sure how to fix it.’ But if you have a highly functional, cohesive team, you can brainstorm and get through it.”

Throughout her time in the industry, Larsen has seen a shift toward products focused on ease of use, for example medicines that are longer-acting or taste good to pets. “If owners have to pill their animal, that is something they don’t want to do. But if they’re giving them a treat, that’s a totally different story,” she says.

Upon graduating from the SVM, Larsen’s ultimate destination was yet unknown. “When I left I had in the back of my mind that research was still of interest to me, but I wanted to get into practice and experience it for at least five years. So that’s exactly what I did.”

Larsen was a practicing veterinarian at the Animal Hospital of Verona, a clinic founded by Bill Gengler, who joined the UW SVM faculty as Larsen was finishing her DVM training.

Then, when the school launched a doctoral program specifically for those with DVM degrees, Larsen returned, earning a Ph.D. while conducting influenza research with Professor Chris Olsen.

Next she was on to a postdoctoral position at the USDA Southeast Poultry Research Facility in Athens, Georgia, studying under Stacy Schultz-Cherry, daughter of SVM Professor Emeritus Ron Schultz.

Meanwhile, she kept in touch with Kevin Schultz, a former SVM professor who was now in Athens as global head of research and development at Merial. When a position of interest opened there, she applied and was hired.

“So all roads lead back to the UW in some way,” Larsen says. Thus, her advice to students: “Take advantage of the many resources here. So many people can play such a major role in your future career.”

Larsen encourages veterinary medical students to consider the varied careers available to them. “I had no idea I would be interested in industry. I started vet school with the idea I was going to be a practitioner, period. But then you get exposed to other things.”

That’s one of the great things about veterinary medicine, she says. “There are so many pathways you can take.” Larsen is headquartered in Duluth, Georgia, and travels often to Boehringer Ingelheim offices in France, Germany, Japan, and other locations.

The chance to engage with different cultures excites her. “It’s such an eye-opening experience to be exposed to all of this and to constantly be learning something new, which is critical for me.”

Though it can require deft planning. In Madison this spring for a meeting of the SVM Board of Visitors, which Larsen serves on, she was next off to foreign lands. “When I leave Wisconsin I am heading to my car at the airport, switching suitcases in the trunk of my car, and am headed to Germany.”