In 2015, UW–Madison launched the All Ways Forward comprehensive fundraising campaign to move the university and its mission forward.

As the campaign concludes this December, it has collectively inspired a sweeping surge of generosity and hope as people use their power of giving to create the future they want to see. This includes at the UW School of Veterinary Medicine, where to date the school has raised more than $135 million in the All Ways Forward campaign.

Funds raised through this campaign have supported the school’s building expansion and allowed for investments in our faculty, research, and substantial new commitments to scholarship support for students. Critically, the school’s campaign success includes $78.5 million in future estate gifts that have been documented, ensuring long-term investments in the school. Below is one such example of this generous support. 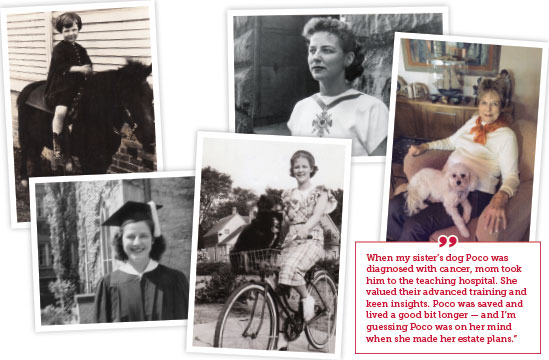 If a person’s character can be discerned from early photos, the adage holds true for June Harper. “She had a genuine connection with animals right from the start,” her daughter, Jacira Paolino, says while sharing a picture of a young June riding a bike with her first dog, Rex, in the front basket.

June displayed an early affinity for animals and was often photographed with them throughout her 95 years of a well-lived life. Her daughter shared a picture of her mother at age two, sitting comfortably atop a pony in the yard of her childhood home in Sheboygan, Wisconsin. And another, beaming during her student days at UW–Madison.

“She was a smart, capable, observant and personable woman,” says Paolino proudly. Having earned a bachelor’s degree in economics from UW–Madison in 1943 and then serving as an efficiency expert at a large department store, Paolino says Harper was ahead of her time. “Mom was in her heyday as a woman at UW.”

“She enjoyed learning all through her life and giving back to the community too. Her golden rule was ‘You participate in your community and you give back to your community!’”

After Madison, she married and moved to Denver, Colorado. June and her husband Jene also owned and operated a cattle ranch near Rocky Mountain National Park, where they hosted guests, lived among real cowboys, managed a herd of over 800 cattle, and lovingly tended to a menagerie of domestic animals. As a result, Harper grew to respect and admire the veterinary profession and kept in touch with the UW School of Veterinary Medicine over the years as their family’s ranch and oil supply business grew.

“She enjoyed learning all through her life and giving back to the community too. Her golden rule was ‘You participate in your community and you give back to your community!’” recalls her daughter. Harper followed the credo closely, both in her adopted state of Colorado, by supporting the local animal shelter, and her birth state of Wisconsin, with gifts to UW–Madison. “I think her true love of animals is what kindled her estate gift to the vet school,” concludes Paolino.

The hope provided by state-of-the-art veterinary medical care for Harper’s own beloved pets fostered her desire to give back. Her unrestricted estate gift to the UW School of Veterinary Medicine will support the school’s new building expansion, as well as the greatest needs of the school and teaching hospital.

“When my sister’s dog Poco was diagnosed with cancer, mom took him to the teaching hospital. She valued their advanced training and keen insights,” Paolino recalls. “Poco was saved and lived a good bit longer — and I’m guessing Poco was on her mind when she made her estate plans. It would have made her happy to know that her gift is supporting others going through the same challenging experiences at the UW School of Veterinary Medicine.”