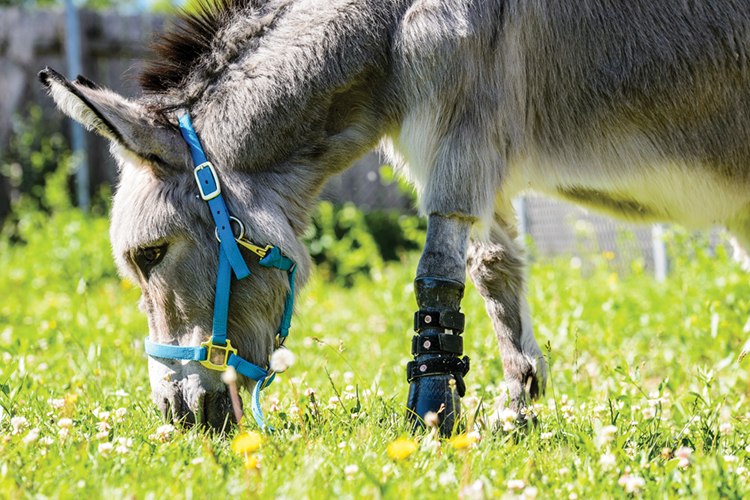 Ferguson, a miniature donkey who had a deformed front left hoof, eats grass in a small pasture as he finalizes his recovery from amputation surgery and receiving an artificial leg at the University of Wisconsin-Madison School of Veterinary Medicine on June 13, 2018. The surgery and aftercare were performed by Samantha Morello, clinical associate professor in the Large Animal Surgery Department, and Kelly Shaw, resident in the Large Animal Surgery Department. (Photo by Bryce Richter / UW-Madison)

Previously plagued by a leg deformity, Ferguson is now standing strong with an artificial limb – the first large animal to receive an amputation and prosthesis at UW Veterinary Care

The crowded surgery room hums with excitement as a rotary saw buzzes through the fiberglass cast encasing the left front leg of a supremely cute, extra fuzzy, little-bit-sassy miniature donkey. More than 20 surgeons, veterinary technicians, students, and other observers have gathered to see the small but mighty Ferguson fitted with a custom-made prosthesis.

Five weeks earlier, the 10-year-old donkey’s disfigured lower left leg was amputated at the fetlock. The procedure was the first amputation with a prosthesis at UW Veterinary Care’s Morrie Waud Large Animal Hospital.

Ferguson — or Fergie for short — may not know that he’s made history, but he’s certainly aware of his ever-growing fan club. During his extended stay in the teaching hospital, he gained an affinity for handfuls of sweet feed, crisp carrots, and frequent neck scratches. Now back at Holyland Donkey Haven near Fond du Lac, Wisconsin, he is the object of daily adoration from both people and fellow donkeys, frequently seen scratching the neck of his equine stablemates as they return the favor — mutual grooming that he wasn’t strong enough to do pre-amputation.

Simply put, Ferguson’s leg deformity could have cut his life short. Amputations are rare in equids and other four-legged large animals due to their size and fight-or-flight nature. “They need four legs that they can run around on at all times,” says Samantha Morello, clinical associate professor of large animal surgery at the UW School of Veterinary Medicine. And amputations of front limbs, which bear about 60 percent of a four-legged animal’s weight, are even more challenging and extremely rare as a result.

But Ferguson was a special case. His easygoing, sweet demeanor and his petite stature (he weighs about 250 pounds), combined with the tremendous pain he was experiencing due to the chronic leg deformity, made him a perfect candidate for a prosthetic device according to Morello.

“It’s his best shot at getting back to a good quality of life,” she said in April ahead of Ferguson’s surgery.

In the photos that follow, see this rescued donkey’s extraordinary journey. 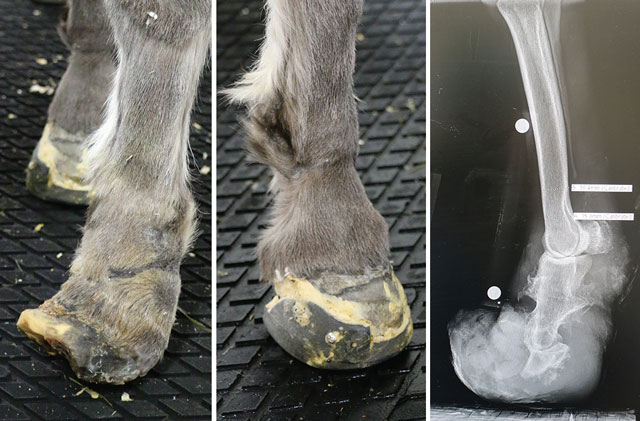 Above, left: When Ferguson was rescued by Holyland Donkey Haven in 2015, his hooves were overgrown and he could barely walk. Holyland brought Ferguson to UW Veterinary Care for evaluation and advice, then worked with their local farrier to reconstruct his deformed left front hoof through trimming and corrective shoeing every four weeks over several years. But in spring 2018, with the deformity still present (pictured) and causing substantial pain, UW Veterinary Care large animal surgeons determined that a partial limb amputation was the best path forward. “No less aggressive measure is likely to provide the comfort and stability that he needs in that limb,” said large animal surgeon Samantha Morello, who led the operation.

Center: Ferguson’s chronic pain caused him to walk in an irregular way that placed pressure on the skin and soft tissue at the base of his heels. This subsequently began to cause deformity in his right hoof, as well. To help realign Ferguson’s conformation and balance his weight, in March UW Veterinary Care farrier Dean Johanningmeier trimmed Ferguson’s right hoof and attached a special shoe (similar to a human orthotic). This was a critical step for the amputation to proceed. “That provided a good foot to stand on,” says Morello.

Right: Radiographs revealed that the bones in Ferguson’s lower left leg (pictured) were chronically deformed and infected and of a different density than those in his right leg. Veterinarians believe the middle phalangeal bone, which normally extends into the hoof capsule, may have been missing from Ferguson’s left leg since birth. 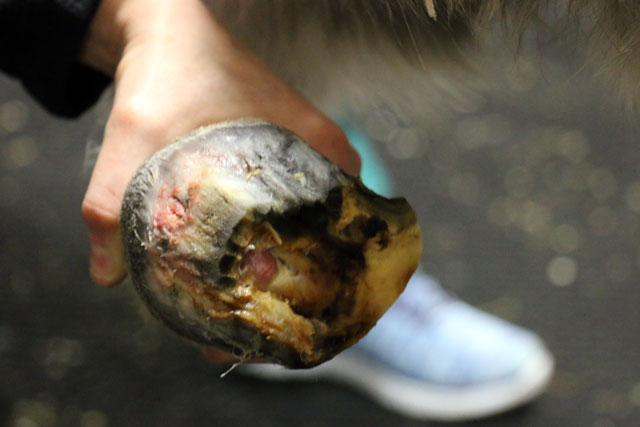 Above: Holyland Donkey Haven did everything possible to manage Ferguson’s left front hoof deformity, but exposed soft tissue and abscesses were an ever-present concern and source of pain. Before his amputation, Ferguson spent the majority of his days lying down due to discomfort. 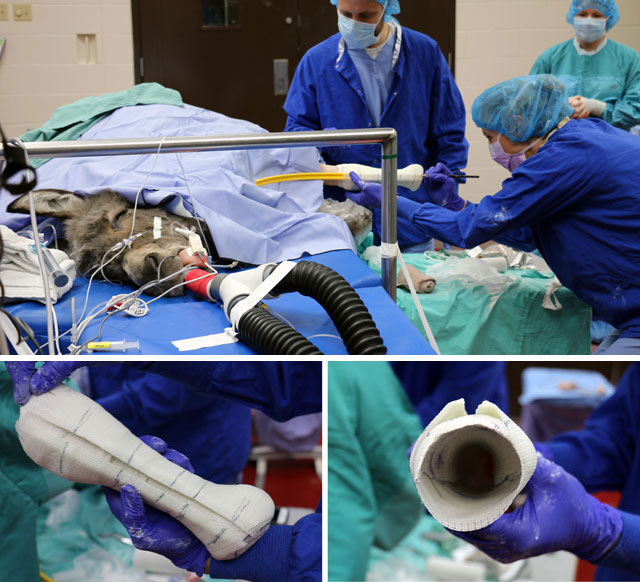 Above: On April 18, Ferguson’s lower left leg was amputated below the cannon bone, at the fetlock joint. Immediately following the amputation, a team from the UW Health Orthotics and Prosthetics Clinic made a mold of Ferguson’s left leg and took measurements of both limbs to plan the construction of a custom-fit prosthetic foot.

Next (not pictured), Morello placed two large stainless steel pins through the canon bone of the left front leg. These pins were incorporated into a cast placed around Ferguson’s leg for five weeks, helping to distribute weight away from the healing amputated limb, which after several weeks in a cast became the stump for Ferguson’s prosthesis. 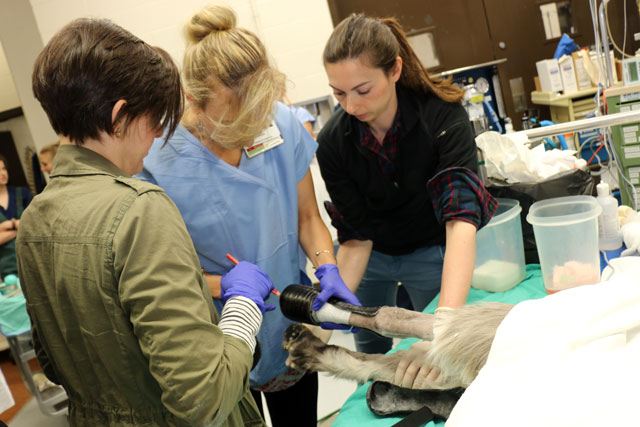 Above: On May 23, Ferguson’s leg cast and pins were removed and he was fitted with the prosthesis. Here, Amy Paulios (center) of UW Health checks the height and angle of the bottom of the artificial limb as compared to Ferguson’s right hoof. The team also ensured that Ferguson could fully flex his leg without rubbing and that the prosthesis was easy to put on and take off. “It’s a perfect fit,” Morello (left) said as the device was slid on. “It’s so cool.” 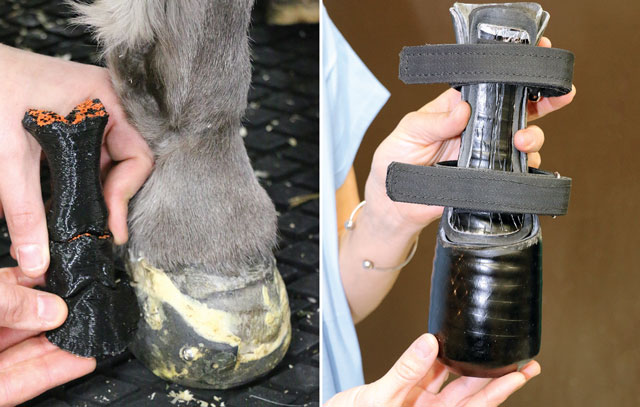 Above, left: Orthopedic surgeons at the SVM also assisted in Ferguson’s case, using the school’s 3D printer to create plastic models of the bones that were to be amputated. These 3D-printed bones, modeled off of radiographs of Ferguson’s right front limb, were placed in the left leg cast below the amputated stump to help mirror the height of the sound leg.

Right: Amy Paulios, a board-certified prosthetist, holds an early iteration of Ferguson’s prosthetic device (additional, stronger straps, along with a clamshell backing, were later added to create a cleaner, closed environment). This was Paulios’ first time producing a prosthesis for an animal. Constructed of carbon fiber and acrylic resin, it’s light to allow for easy movement, while durable enough to withstand outdoor elements. She was assisted with socket fabrication by Patrick Shea at UW Health and Beau Marek at the Hanger Clinic. “I’m proud of our teamwork,” she said. 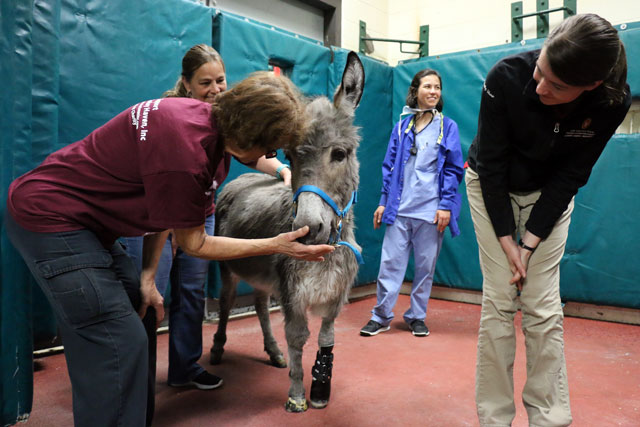 Above: Just minutes after being fitted with the prosthesis and waking from anesthesia, Ferguson was on his feet, standing strong on the prosthetic device. “You got a brand new foot,” said Angela Langoski (far left), founder and president of Holyland Donkey Haven. Throughout Ferguson’s stay at the hospital, Langoski made the 90-minute drive to UW Veterinary Care at least twice a week.

Langoski founded Holyland in 2011 to rescue, rehabilitate, and raise awareness about donkeys. “It’s very, very rewarding to see them come alive,” she said. “They’re highly intelligent and they love attention. They’re like a dog with hooves.” The nonprofit organization places many donkeys into adoptive homes. For some others, like Ferguson, Holyland provides a lifelong sanctuary. 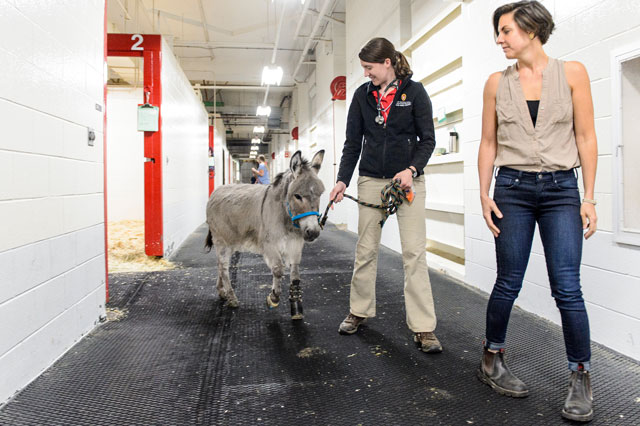 Above: On June 13, the day before Ferguson headed home to Holyland, Morello and large animal surgery resident Kelly Shaw took the valiant donkey out for a final jaunt. “He’s walking so well,” Morello said as she strolled beside him.

While Ferguson grazed and basked in the sun, the surgeons reflected on his journey. “It takes a special patient to be able to come through and do well,” Shaw said. “It’s a testament to Ferguson and his toughness and tenacity.” 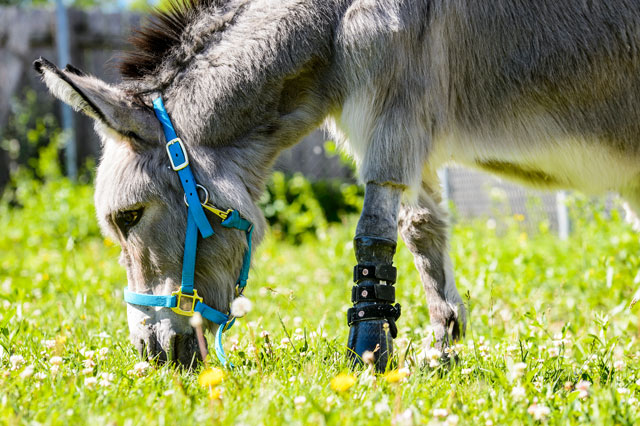 “There’s an inverse relationship between Ferguson’s personality and his size, and that personality has just grown with every day that he’s been recovering,” Morello added. “We knew that his attitude was going to be what saved him as much as anything else.”

Morello is grateful for the chance to assist Holyland and credits the group’s unwavering dedication to Ferguson. “It’s been an awesome opportunity for a group effort to do the right thing.”