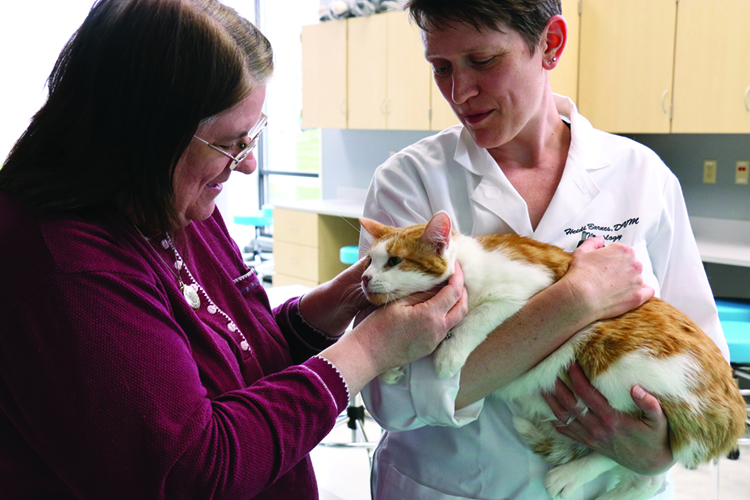 A neurologist at the SVM has developed an easier, less stressful way to give cats seizure medication and is working to prove its effectiveness through a clinical study — with promising results.

The story of Bruce, a young domestic shorthair, is one you may have heard before. One day, a bedraggled tomcat wanders onto the porch of a kind-hearted couple. He makes return visits in the coming weeks, and the enamored pair starts leaving food just outside their door. Before too long, the persistent stray charms his way inside. And just like that, the alley cat becomes a house cat — and the proud new “owner” of two devoted people.

Clinical Study: Cats with Seizures
The Small Animal Neurology Service is recruiting RECORDS of cats receiving only phenobarbital for seizure management. They are seeking feline medical records including a recording of seizures and phenobarbital serum levels, in an effort to establish a new reference range for phenobarbital for cats.

The following information is needed: phenobarbital serum levels, seizure logs, permission to contact the client or primary veterinarian with further questions after reviewing the medical record.

Please help the Neurology Service reach this much needed goal for feline patients. Contact Heidi Barnes Heller with further questions or to participate.

In this cat tale, the people are Elizabeth “Liz” and Don Martiniak of Janesville, Wisconsin. They opened their home to Bruce with complete confidence that they would gain a friendly, loving companion. And they were right. Today, he’s 13 pounds of orange and white fur and affection. But little did they know Bruce also harbored a medical complication, a plot twist in this otherwise familiar story.

Coping with Seizures
In June 2015, Bruce began displaying odd behavior. Every couple of months, he would lose consciousness for a fewminutes while his limbs moved sporadically. Following these episodes, he would bounce frantically around the house for as long as an hour at a time. To make matters worse, stressful scenarios, like driving the short distance to their primary care veterinarian, seemed to trigger similar incidents. For Liz Martiniak, it was déjà vu.

“I had a cat many years before who experienced seizures,” she says. “I was told there was nothing I could do except keep them calm and try not to let them hurt themselves during the seizure.”

Seizures don’t afflict a major proportion of the feline population. But they are one of the most common reasons why cats are referred to veterinary medical neurologists, according to Heidi Barnes Heller, clinical assistant professor of neurology and neurosurgery at the UW School of Veterinary Medicine (SVM). They are caused by an imbalance of electrical signals in the brain.

“If you imagine a teeter-totter, you want to be parallel to the ground as an overall electrical balance in the brain,” says Barnes Heller. “Seizures happen when you have too much excitation or too little inhibition happening in a particular area of the brain.” An electrical imbalance can stem from idiopathic epilepsy, which is itself caused by a simple chemical imbalance, or diseases that excite or suppress brain activity, like liver failure, low blood sugar, head trauma, brain tumors, meningitis, and strokes. Common clinical signs of seizures in cats include abnormal face or body movement with or without a change in their awareness.

“For example, some cats can lay on the ground and ‘paddle’ their limbs, go unconscious, and urinate,” says Barnes Heller. “Other cats twitch their lips, ears, and face, seem a bit dazed, and then go on about their business, while other cats run around the room like they’ve gone crazy and then seem confused when they settle down. How the seizure appears is dictated by what part of the brain is activated during the seizure.” Medicinal treatments for seizures in animals have existed since the early 20th century, although this is perhaps not widely known. Based on their previous experience, the Martiniaks assumed there were no medical solutions for Bruce, so they chose not to bring the issue to their veterinarian. But a fortuitous encounter with an episode of the Larry Meiller Show on Wisconsin Public Radio made them change their perspective.

Seizing an Opportunity
Sandi Sawchuk, a clinical instructor and primary care veterinarian at the SVM, makes frequent guest appearances on Meiller’s show. She typically talks about a variety of pet topics and takes caller questions on the air. Liz Martiniak often listens to these helpful segments, but one Thursday while out driving, something told her to make the leap to being a caller.

“I decided to pull over and call, and I told her about Bruce,” says Martiniak, “and she told me about a clinical trial for a seizure medication at the UW vet school. I decided to follow through right away.”

It was a good thing she did because many complications can result from seizures in cats, according to Barnes Heller. “Leaving a cat’s seizures untreated risks brain damage,” she says. “The damage may result in progressively worsening seizures — and therefore a more difficult seizure pattern to treat or resolve — or changes in personality, behavior, and attitude.” In addition, if a cat’s seizures remain uncontrolled for a long period of time, it can develop other organ problems. Sudden death resulting from seizures is uncommon in cats, but it does occur.

Not long after Liz Martiniak’s conversation with Sawchuk, she and her husband consulted with their primary care veterinarian at Blackhawk Veterinary Hospital, who recommended they explore the clinical study. With a referral in hand, they brought Bruce to UW Veterinary Care for a neurological examination as soon as they could.

Although Bruce did not undergo advanced testing or diagnostic imaging, based on his prior clinical signs and the results of the examination, Barnes Heller determined his seizures were likely caused by idiopathic epilepsy or a previous head trauma. In many ways, this was good news — it did not appear he was suffering from another underlying disease, his seizures were likely treatable, and he was eligible for the clinical study.

Feeling at ease with Barnes Heller, the Martiniaks enrolled Bruce in the study without thinking twice. “Dr. Heidi has been wonderful,” says Liz Martiniak. “Everything she does with Bruce she explains so thoroughly — what it’s for and why it needs to be done. She handles Bruce so gently. I can tell she really loves him.”

“They’re such great advocates for Bruce,” Barnes Heller says of the Martiniaks. “They approached the situation saying, ‘Let’s make Bruce better and advance science at the same time.’”

Tale of Two Seizure Treatments
First discovered in 1912, phenobarbital is the oldest anti-seizure medication that is still commonly used as a treatment for people today. For veterinarians, it is usually the first go-to drug for addressing seizures in cats. Initially recognized for its sedative and hypnotic properties, it was later discovered that phenobarbital was an effective anticonvulsant because it suppresses the quick, extraneous firing of neurons in the brain that is associated with seizures. It’s been a life-changing drug for many cats — at least, for those that will take it.

“Oral phenobarbital has been the standard of care since the 1900s, but getting some cats to take a pill is difficult,” says Barnes Heller. “It’s a stressful situation for many cats, and you have to give a repeated dose at the same times every day or the drug won’t work.”

To help cut down on anxiety for cats and hassle for owners, and to expand the pool of cats that can be treated effectively with phenobarbital, Barnes Heller developed a transdermal version of the drug specifically for cats. The special lotion can be rubbed into a cat’s ear twice per day, and the cat’s body slowly absorbs the drug in the necessary amounts through its skin.

To do this, she established a clinical trial with funding from the SVM’s Companion Animal Fund, a pool of money donated by generous individuals and clinics that supports vital animal health care studies. Over a period of seven months, each participating cat was first given oral phenobarbital and then the topical form, and their responses to the different treatment methods were compared.

“The study has shown that the cats are tolerating the topical treatment, absorbing it properly, and doing well in terms of their seizures,” says Barnes Heller. She plans to publish the results and bring the transdermal medicine to the market in the near future.

Seven of the eight cats in the study have experienced positive results, and Bruce is among them. His seizures “responded beautifully” to both the oral and topical delivery methods, says Barnes Heller, and he has been seizure-free since he began the trial in September 2016.

The clinical trial requires multiple blood draws to determine how well the drug is being absorbed. But rather than ask the Martiniaks to make the trek to Madison for each one — and to cut down on stress for Bruce — Barnes Heller and Bruce’s primary care veterinarian worked out a system where blood samples could be taken at Blackhawk Veterinary Hospital and sent over night to the SVM for analysis.

“He is so happy now,” says Liz Martiniak. “He seems more affectionate and relaxed, as well. Prior to the medication, each seizure he had was worse than the one before. We are so grateful he got this help.”