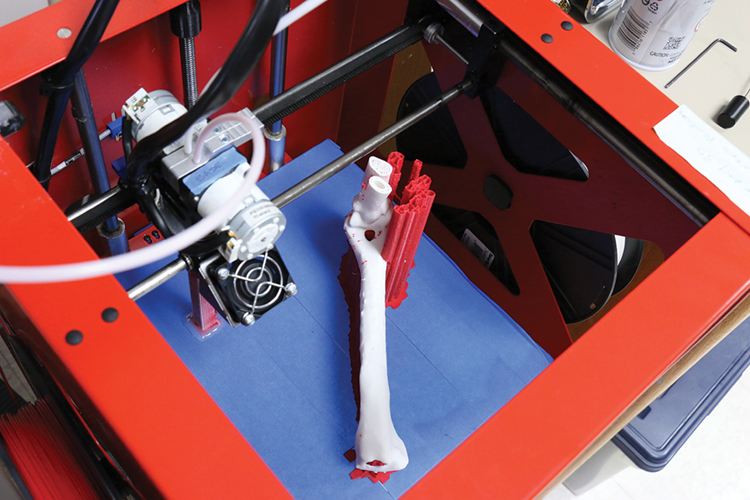 UW Veterinary Care's 3D printer in the process of rendering a canine limb model made from a plastic polymer. (Photo: Nik Hawkins)

The Gremers and Great Danes have gone hand-in-paw for almost a generation.

The first time Carrie Gremer’s family brought home a member of this tall, regal breed, she was in middle school. Years later, when she was dating her now-husband, Steve Gremer, that dog made such an impression on him that he gave a Great Dane to his parents as a gift. Eventually, the Gremers found themselves with two of their own “gentle giants” — first Frasier and then Edison.

For two years, the dogs were great buddies; but age took its toll on Frasier, and he passed away after a bout of major health issues. A year and a half later, with the grief of Frasier’s passing less keen, the Gremers visited a breeder, and they came home with a sweet, silly, slightly nervous Great Dane puppy named Elsa. She and Edison became fast friends.

“It was amazing how happy Edison was when we brought Elsa home,” says Carrie Gremer. “He literally had a smile on his face. They get along incredibly well.”

The Gremers were looking forward to some healthy puppy years with Elsa. But when she was around five months old, it became clear she would need special care. Her left front forelimb showed signs of abnormal growth that made it difficult for her to walk. The Gremers soon learned from a veterinarian that one of her growth plates had closed prematurely. To keep the deformity from getting worse while Elsa grew, a veterinary surgeon in Chicago removed a segment of her ulna, the thinner and longer of the two forelimb bones.

Suspecting that Elsa would need a second, more complicated procedure, the surgeon referred her to the Small Animal Orthopaedic Surgery Service at UW Veterinary Care (UWVC). The orthopaedics team decided to monitor Elsa’s growth for a couple of months and then follow up with more diagnostic imaging and physical examinations of her limbs.

“Her bones continued to grow in length, and the deformity was not getting any worse,” says Jason Bleedorn MS’15, clinical assistant professor of orthopaedic surgery. “So we opted to wait until Elsa was closer to full growth — one year for a Great Dane — before proceeding with a definitive surgical correction.”

Bleedorn anticipated a highly complex procedure, one that would benefit from advanced planning and practice. He turned to UWVC’s in-house 3D printing machine for help. This cutting-edge technology lets surgeons convert diagnostic imaging scans, like computed tomography (CT) and magnetic resonance imaging (MRI), into three dimensional models composed of a plastic polymer. The highly accurate models have numerous advantages. For example, they allow surgery teams to make better assessments of complex bone deformities and injuries. They also give surgeons the chance to take a practice run through difficult procedures.

“I typically print at least two copies of a limb,” says Bleedorn. “This allows me to have one unaltered model and one model that I use for a surgical rehearsal. I bring them both into the operating room during surgery so I know what the optimal repair should look like when we’re done.”

3D Printing Available to Veterinarians
UW Veterinary Care can print 3D models of limbs, spines, and skulls for use by off-campus individuals in clinical cases and research.

“For a simple limb like Elsa’s, it probably takes me one to two hours to do the segmentation to make the 3D software model and set it up on the printer,” says Jason Bleedorn, clinical assistant professor of orthopaedic surgery. “The actual print time is anywhere from 10 to 40 hours. This varies based on the size of the model and the quality of the print. We have printed entire limbs, spines, skulls, and radiation therapy models for clinical cases and research.”

The material used in the production of 3D models is inexpensive, but the machine, maintenance, and software are very costly. For example, the site license for 3D planning software, which is shared by 10 campus researchers, costs $10,000 per year.

UWVC first acquired its 3D printing machine more than a year ago. However, some of its surgeons have been using the technology for more than three years through a partnership with the UW College of Engineering. Besides limb deformities like Elsa’s, 3D printing is used at UWVC for complex fractures, limb salvage procedures, orthopaedic research, and teaching. Bleedorn has recently printed a spine model for a neurology case and skull models for dentistry and ophthalmology cases.

In Elsa’s situation, the technology worked extremely well. Bleedorn and his team, which included surgery residents Rebecca Csomos and Ben Yarnall, performed a surgical rehearsal using a bone model of Elsa’s forelimb. Taking advantage of 3D printing in yet another way, they used the model to pre-contour a specially ordered plate that they could use to correct the angulation and torsion of Elsa’s bones.

“All of this allowed us to make any final adjustments to her surgical plan prior to the real deal,” says Bleedorn. “Pre-contouring the bone plate also cut down on the duration of the procedure.”

The procedure itself lasted six hours. The surgery team first used a small arthroscope to address a mismatch in the surfaces of Elsa’s radius and ulna where they meet at the elbow joint. Next, they cut a wedge from both bones and turned them to eliminate their improper rotation, one of the characteristics of her limb deformity. Finally, they used the pre-prepared plate to fix the two pieces of Elsa’s radius together. After a short stay in the hospital, Elsa went home in a splint for her recovery. She continued to show excellent progress in weight-bearing at every re-check and at each appointment in UWVC’s rehabilitation clinic with physical therapist Courtney Arnoldy. In the end, her leg bones healed in the new position.

Elsa will likely never have a completely normal range of motion in her affected limb, which will also be prone to develop arthritis down the road. But the Gremers have noticed a major difference in her quality of life.

“Her care and treatment at UWVC have made a tremendous and positive impact on the way she can walk, run, and play, and her leg is now straight,” says Carrie Gremer. “Watching Elsa finally play in the yard with Edison, and being able to enjoy walks and outings, makes all that we’ve gone through worth it. We felt the team went above and beyond for our family.”